Approximately 40–70 % of all epilepsies are now estimated to have a genetic cause. Though most epilepsies are genetically complex, the past decade has seen an explosion of advances in genetic etiologies. Early gene discovery in epilepsy was limited to large families with milder, inherited monogenic epilepsies using linkage analysis. Newer techniques underlie the past decade’s accelerated gene discovery, especially in noninherited, severe epileptic encephalopathies, and have reinforced the diverse role of cellular functions that may be affected. This review examines recently discovered epilepsy genes and discusses the importance of a genetic diagnosis in patient care.

Significant advances in understanding the genetic mechanisms behind epilepsy have been made in the past 20 years, especially in the case of epileptic encephalopathies. Though approximately 20–30 % of epilepsies can be attributed to an obvious acquired etiology, such as stroke or traumatic brain injury,1,2 genetic factors are estimated to underlie 40–70 % of all epilepsies.3–5 The ultimate goal of human genetics research is to aid the development of disease-targeted treatment. Is this achievable in the field of epilepsy? We have known since the early 1930s that genetics play an important role in epilepsy. However, epilepsies are known to be genetically complex disorders for most patients, and not until the past decade have advances been made to unravel the genetics. This review discusses recent progress in epilepsy genetics, and Table 1 summarizes the main syndromes and associated genes, including some additional syndromes otherwise beyond the scope of this text. We highlight the mechanistic insights gained by identification of epilepsy genes and discuss how a genetic diagnosis can influence patient treatment.

Monogenic epilepsies are interesting symptomatic epilepsies, with more than 300 genetic disorders described to date. These include ion and non-ion channel disorders in familial cases. These disorders started with the discovery of the first epilepsy gene, CHRNA4, in 1995.6 At that time, genetic discoveries were mostly restricted to large families having milder, inherited epilepsies using linkage analysis. This technique led to the discovery of the genes behind autosomal dominant nocturnal frontal lobe epilepsy (ADNFLE)6 and genetic/generalized epilepsy with febrile seizures plus (GEFS+).7 However, linkage analysis is not sufficient to uncover de novo mutations responsible for severe epileptic encephalopathies. More recently, candidate gene screening, microarray techniques, and massive parallel sequencing technology have been responsible for accelerated discovery of epilepsy genes.8,9

Gene discovery has reinforced the complex nature of genetics in disease. A given genotype may be expressed as a range of phenotypes and severities. For example, a missense mutation in the SCN1A gene may result in the milder GEFS+ phenotype,7,10–12 whereas a loss of function mutation may result in severe myoclonic epilepsy of infancy (SMEI)/Dravet syndrome (DS).13–15 Conversely, myriad genotypes may be expressed in a similar phenotype. Culprit genes may encode proteins having as diverse roles in cellular signaling as receptors, transporters, neurotransmitter releasers, and transcription factors regulating neuronal migration/maturation, or those having more general roles in cellular metabolism.

Epileptic encephalopathies represent a spectrum of disorders in which seizures, often refractory, accompany global cognitive and developmental impairments. KCNQ2 encephalopathy is characterized by seizures beginning in the first week of life.16,17 A de novo missense mutation in a voltage-gated potassium channel subunit, Kv7.2, leads to refractory seizures and a grossly abnormal EEG exhibiting multifocal epileptiform discharges or a burst suppression pattern. Although roughly two-thirds of patients can achieve seizure freedom some months to years after onset, they are developmentally delayed, with intellectual disabilities ranging from mild to profound, and have axial hypotonia, limb spasticity, and impaired visual tracking.

At the other end of the spectrum are autosomal dominant mutations in Kv7.2 or Kv7.3, linked with 60–70 % of cases of benign familial neonatal

epilepsy (BFNE).18 Like patients who have KCNQ2 encephalopathy, BFNE patients have seizure onsets in the first week of life. Seizures are brief but can occur as many as 30 times daily and are characterized by a tonic component that evolves into autonomic and motor symptoms and, often, apnea. However, EEG and development are normal; seizures resolve a month to a year after onset. Many patients do not require antiepileptic therapy. These two very closely associated mutations are a prime example of the complexity of genetics in clinical practice.

Recently, next-generation sequencing has identified four de novo mutations in KCNA2, the gene encoding voltage-gated potassium channel Kv1.2, in six patients (one mutation occurred three times).19 Patients have epileptic encephalopathy consisting of both febrile and afebrile seizures, as well as mild to moderate intellectual disability and speech delay, with or without ataxia. Mutations resulted in either loss or gain of function, implicating both hyperexcitability and electrical silencing of the voltage-gated potassium channel as playing a role in neurodevelopmental disorders.

Recent studies by the Epi4K Consortium and Epilepsy Phenome/ Genome Project of patients having two classic epileptic encephalopathy syndromes, infantile spasms or West syndrome and Lennox-Gastaut syndrome (LGS) found de novo mutations in 15 % of patients.8,9 In addition to genes having previously established associations with epileptic encephalopathy (SCN1A, SCN2A, SCN8A, CDKL5, STXBP1, KCNQ2, and KCNT1), the studies identified a significant excess of de novo mutations in ALG13,8 GABRB3,8 and DNM1.9 ALG13 is an X-linked gene encoding a subunit of uridine diphosphate-N-acetylglucosamine transferase and had previously been reported in a female patient who had seizures and severe intellectual disability.8 GABRB3 encodes a subunit on CNS ligand-gated chloride channels and has previously been implicated in epilepsy in Angelman’s syndrome.26 DNM1 encodes dynamin 1, a GTPase expressed exclusively in brain that provides mechanical force to pinch off synaptic vesicles budding from the membrane. It is expressed during postnatal brain development, peaking during neurite and synapse formation, which may also account for findings of developmental delay with severe to profound intellectual disability, hypotonia, and absence of speech in the five patients who had the mutation.9 Overall, patients who had epileptic encephalopathies were found to carry more de novo mutations than controls.9

A recent study showed that 1 % of patients having epileptic encephalopathy and no previous genetic diagnosis were discovered to carry a mutation for SCN8A, which encodes Nav1.6.27 These individuals developed multiple seizure types, intellectual disability, and motor manifestations, such as hypotonia, dystonia, ataxia, and hyperreflexia. 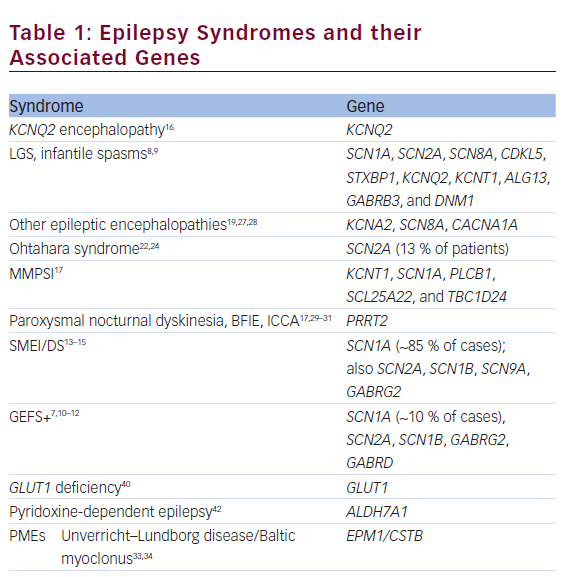 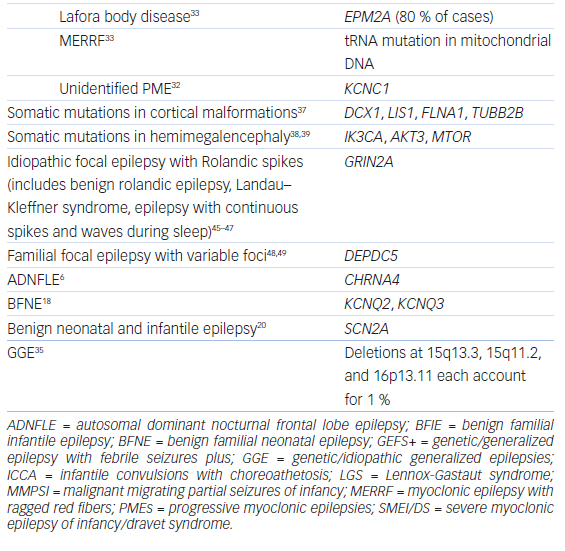 Malignant migrating partial seizures of infancy (MMPSI) is a devastating epilepsy featuring multifocal seizures and progressive neurologic decline over the first 6 months of life. Five different genes, KCNT1, SCN1A, PLCB1, SCL25A22, and TBC1D24, have been associated with this syndrome. Seizures become more frequent over the first year of life and may be nearly continuous for several days.17 PRRT2, which encodes an identically named protein that interacts with SNAP25, a mediator of synaptic vesicle release, is also expressed as a variety of phenotypes. It was initially associated with paroxysmal nocturnal dyskinesia but may also be seen in BFIE and infantile convulsions with choreoathetosis (ICCA). Nonsense, missense, frameshift, and splice site mutations can be responsible for any of these phenotypes.17,29–31

The progressive myoclonic epilepsies (PMEs) are characterized by myoclonus, tonic–clonic seizures, ataxia, and progressive neurologic decline.32,33 PMEs include Unverricht–Lundborg disease (EPM1), Lafora body disease (EPM2A), myoclonic epilepsy with ragged red fibers (MERRF), and neuronal ceroid lipofuscinoses. Recently, a de novo mutation in KCNC1 was identified in 16 out of 84 unrelated individuals who had unidentified PME.32 KCNC1 encodes for a subunit of the Kv3 voltage-gated potassium channels. Many of these individuals had normal development with report of myoclonus between ages 6 and 14, with infrequent generalized tonic–clonic seizures. Myoclonus worsened into adolescence, eventually interfering with ambulation. About half the subjects had mild cognitive decline.

The vast majority (90–99 %) of patients having EPM1 have a genetic mutation in CSTB, which encodes cystatin B. Patients with EPM1 can have CSTB alleles with dodecamer repeats; longer repeats were found to have a modulating effect on the age of disease onset and severity of myoclonus in a Finnish population.34

Copy number variants (CNVs), deletions or duplications of chromosomal regions, are found in both the healthy and the diseased genome and have emerged as an increasingly recognized factor predisposing to epilepsy. Additionally, patients having CNV with epilepsy are more likely to have developmental delay, intellectual disability, or autism spectrum disorder.35 In addition, CNVs are responsible for 3 % of genetic/idiopathic generalized epilepsies (GGEs): Deletions at 15q13.3, 15q11.2, and 16p13.11 each account for 1 % of GGEs.35,36

Although germline mutations may account for a large percent of epilepsy mutagenesis, postzygotic mutations and mosaicism can also cause divergent epilepsy phenotypes. Using next-generation sequencing techniques, disease-associated somatic mutations have been demonstrated in peripheral blood in patients who have subcortical band heterotopia (double cortex syndrome), pachygyria, and periventricular nodular heterotopia.37 Mutations in DCX1 and LIS1 were associated with subcortical band heterotopia, FLNA1 with periventricular nodular heterotopia, and TUBB2B with pachygyria. More recently, exome sequencing in patients with hemimegalencephaly who underwent hemispherectomy has demonstrated de novo somatic mutations in IK3CA, AKT3, and MTOR genes in 30 % of cases.38,39

With the emerging picture of complexity in epilepsy and genetics, the clinician may be inclined to abandon gene testing altogether. However, some conditions warrant consideration of genetic diagnosis, for it may influence treatment. Diagnosis of BNFE may influence a decision to defer treatment. Genetic testing can identify inborn errors of metabolism such as GLUT1 deficiency and pyridoxine-dependent epilepsy when successful therapy hinges on specific nutritional approaches (ketogenic diet and pyridoxine supplementation, respectively).5,40–42 Sodium channel blockers may exacerbate seizures in patients who have GEFS+ and DS.43 More challenging, advances in genetics may illustrate the molecular basis for pharmacoresistance to specific medications in some patients and may help predict more effective alternatives. They may also help identify individuals at higher risk for sudden unexplained death in epilepsy (SUDEP): KCNQ1, in addition to encoding a voltage-gated potassium channel expressed in brain, also encodes a cardiac potassium channel that is the most common cause for longed QT syndrome.44

It is likely that the next 5 years will see major developments in gene sequencing and analytics. The availability of inexpensive whole genome analysis in epilepsy will significantly affect diagnosis and management. The time is soon arriving for idiopathic epilepsy to disappear from our lexicon and for precision genetic diagnosis and therapeutics to replace uncertainty and tribulations.

Sarah Zubkov, MD, and Ruben Kuzniecky, MD, have no conflicts of interest to declare. No funding was received for the publication of this article.

This article is published under the Creative Commons Attribution Noncommercial License, which permits any noncommercial use, distribution, adaptation,and reproduction provided the original author(s) and source are given appropriate credit.