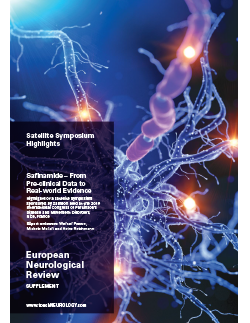 The efficacy of safinamide as an add-on therapy to levodopa in Parkinson’s disease (PD) is believed to result from it uniquely functioning both as a monoamine oxidase inhibitor (MAO) and as a glutamate modulator. A series of animal model studies, including some using 6-hydroxydopamine hemi-lesioned rats, indicate that under parkinsonian conditions, safinamide blocks or reduces glutamine release in key motor areas of the basal ganglia which are associated with ‘OFF’ episodes and dyskinesia. The use of safinamide in PD is supported by extensive data from pivotal phase III clinical trials such as the Mid- to Late-Stage Parkinson’s Disease Fluctuating Patients (SETTLE) study (n=549), Study 016 (n=669) and its extension Study 018 (n=544), all of which showed significant increases in ‘ON’ time without troublesome dyskinesias and significant reductions in ‘OFF’ time (p<0.001 for both versus placebo in the SETTLE study). Further to these findings, an increasing body of evidence from real-world studies supports safinamide use in PD and provides insights into its action. These studies show that safinamide can correct overactive glutamatergic neurotransmission in specific circuits in the M1 motor cortex in patients with PD and that it also significantly reduces long-term levodopa exposure, which decreases dose-dependent adverse events. As with clinical trial findings, real-world evidence on safinamide use in PD indicates that it increases both ‘good’ ON-time and motor functions and has potentially beneficial effects on non-motor symptoms such as pain, mood and sleep disorders. Safinamide therefore, is a valuable option for improved control of motor and/or non-motor symptoms in PD. 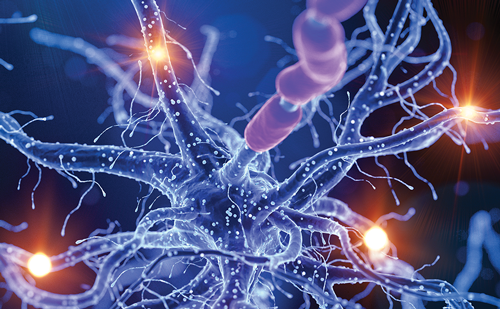 Following approval in Europe in 2015 and in the USA in 2017,1 and its subsequent introduction, safinamide has become established as an effective and well-tolerated add-on to levodopa treatment in Parkinson’s disease (PD). Despite the extensive clinical trial data and a growing body of real-world experience of this drug,1,2 there are still aspects of its […]