In 1945 Karl Ekbom coined the term ‘restless legs syndrome’ (RLS), which is still sometimes referred to as Ekbom’s syndrome. RLS is a common sensorimotor condition characterized by predominantly nocturnal dysesthesias relieved by limb movement. RLS is not a new disorder, having been documented in the medical literature for over half a century.1 However, in recent years RLS has been receiving increased attention following approval, in May 2005, by the US Food and Drug Administration (FDA) of the first agent indicated for the treatment of the condition. Also in 2005 the epidemiology and pathophysiology of RLS were reviewed by the RLS Foundation in the RLS Medical Bulletin2 (available at www.rls.org).

This article summarizes the current understanding in these fields and highlights the advances made since 2005. The clinical diagnosis and management of RLS are beyond the scope of this article and have been reviewed elsewhere.2–4

Epidemiological characterization necessitates a clear definition of disease. The first formal criteria for the diagnosis of RLS were published by the International RLS Study Group (IRLSSG) in 1995. These criteria were updated in 2002 (see Table 1) and represent the current ‘gold standard’ for diagnosis of RLS.5 The presence of RLS correlates with periodic leg movements of sleep (PLMS) on polysomnography and periodic leg movements of wakefulness (PLMW) on the suggested immobilization test,6 but the diagnosis remains purely clinical. Hence, epidemiological studies rely on subjective reports. The IRLSSG criteria do not specify a cutoff of symptom frequency or severity, although there are many people in whom RLS symptoms are mild and do not impair quality of life (QOL). There has not been a universally accepted definition of clinically significant RLS, although the International RLS Study Group Rating Scale (IRLS) is currently the best validated measure of severity, with a score greater than 10 points (of 40 possible total points) indicating moderate to severe disease.7 Future research will likely employ published validated instruments to define clinically significant RLS.

Ekbom estimated the prevalence of RLS to be 5% in the general population. Subsequent survey studies have estimated the population prevalence of the disorder to be 1–29%.8 The RLS Epidemiology, Symptoms, and Treatment (REST) trial is the largest survey study to date of RLS prevalence. Questionnaires were completed by 23,052 patients presenting to primary care practices in the US and four Western European countries during a two-week period. Any degree of RLS symptoms was experienced by 11.9% of respondents, 9.6% had at least weekly symptoms, and 551 (2.4% of total respondents, 3.4% of respondents with complete data) had at least twice-weekly symptoms and endorsed a negative impact on QOL.9 Recently, similar figures have been reported in the Irish10 and Spanish11 primary care populations.

Prevalence estimates derived from primary care patients may overestimate general population prevalence because older and sicker persons are over-represented. However, a 1996 random digit dialing survey of adult Kentucky residents estimated a 10% prevalence of RLS in the adult population,12 which is similar to that found in the REST study.

International variations in the prevalence of RLS and the genetic and sociocultural differences that may account for this variation remain poorly understood. Most prevalence studies of RLS have been conducted on Caucasian populations. Prevalence estimates in East Asian studies included 0.1% in a Singaporean survey13 and 12.1% in a large Korean survey.14 (The latter study used a single question—“Have you ever experienced symptoms of RLS?”—so the prevalence of clinically significant RLS is probably much lower.) A Japanese survey found RLS symptoms in 5% of respondents but clinically significant RLS in 1.5%.15 Recently, Rangarajan et al. reported the results of a door-to-door survey of 1,266 individuals in Bangalore, India. They found a prevalence of RLS of 2.1% using the IRLSSG criteria, and 1.2% reported RLS that disrupted sleep.16 The prevalence of RLS in African populations has not been studied.

In summary, symptoms of RLS are quite common, and the population prevalence of RLS severe enough to cause impairment in QOL and warrant medical treatment is probably about 2–3%. This makes clinically significant RLS two to six times as prevalent as epilepsy in developed countries (estimated prevalence of 0.5–1%).17 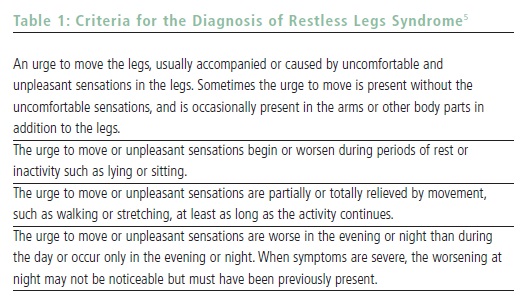 Many epidemiological studies have found some degree of female predominance among RLS sufferers, but reported female–male ratios vary from one to three. The female–male ratio among subjects with RLS in REST was 2.1, but this ratio did not differ significantly from the female–male ratio of all survey respondents.9 In the Kentucky telephonebased survey, the odds ratio (OR) for RLS in females was 1.33.12 In contrast, Lee et al. found an OR of 2.64 (95% confidence interval (CI) 1.24–7.74) in an American community sample,18 and Berger et al. found an OR of 1.98 (95% CI 1.25–3.13) in a German population.19 The weight of evidence would suggest that about twice as many women as men suffer from RLS, but the physiological basis for this difference and the degree to which this figure may be exaggerated by reporting bias are not known.

Population-based studies have found an increasing prevalence of RLS with age. Phillips et al. found a 3% prevalence of RLS symptoms in persons <30 years of age, about 10% in persons 30–79 years of age, and 19% in persons 80 years of age and older.12 Berger et al. found a steady increase from 4% in the third decade to 15% in the eighth decade.19 The IRLSSG has defined criteria for the diagnosis of RLS in children,5 and Kotagal and Silber retrospectively diagnosed RLS in 32 of 538 patients presenting to a pediatric sleep disorders clinic.20 However, populationbased studies assessing the prevalence of RLS in the pediatric population are lacking. As many adult RLS patients report an onset of symptoms in childhood,21 there is reason to believe that substantial numbers of children and adolescents are affected.

Racial differences in RLS have not been completely explored. Anecdotally, African-Americans are under-represented in RLS specialty clinics.8,18 However, an analysis of a community-based sample of 1,071 adults in Baltimore found the prevalence of clinically significant RLS to be 4.7% in African-Americans and 3.8% in Caucasians. There was no statistically significant difference in the prevalence between groups before or after adjustment for other demographic variables.18 Thus, the relative absence of African-Americans in specialty clinics likely has much more to due with access to and utilization of healthcare than with biological differences.

RLS is encountered with greater than expected frequency in several general medical conditions, and the RLS occurring in these conditions is often referred to as secondary RLS. The most well-established secondary causes of RLS are renal failure, iron deficiency, and pregnancy. RLS is common, with 20% prevalence, in the hemodialysis population, tends to be more severe than primary RLS, and is a predictor of mortality in this population.22 Iron deficiency has long been thought to be associated with RLS.23 O’Keffe et al. demonstrated significantly lower levels of ferritin (a sensitive indicator of body iron stores) in RLS patients than in controls,24 and this finding has been reproduced in several subsequent studies.8 Ekbom first noted an increased prevalence of RLS in pregnancy, and Manconi et al. have applied IRLSSG criteria to 200 consecutively enrolled pregnant women and found prevalences of 27 and 12% for symptoms at least twice monthly and at least three times weekly, respectively.25

Assessment and Treatment of Myoclonus: A Review

Myoclonus is defined as a sudden, brief, lightning-like muscle contraction.1 It was first described by Friedreich in 1881 when he detailed sharp jerks involving the bulk of a full muscle without marked limb or joint movement and called it paramyoclonus multiplex.2 Myoclonus may be described as either positive myoclonus (increase in contraction activity) or negative myoclonus (inhibition […]

It has been nearly 160 years since Friedreich’s ataxia (FRDA) was clinically recognized and described1 and 25 years since the FXN gene was discovered.2 Despite this, there are still no approved therapies for FRDA. FRDA is an autosomal, recessively inherited, neurodegenerative disease that typically presents in childhood and results in progressive gait and limb ataxia, with the extraneural features […]

Welcome to the spring edition of US Neurology. This journal aims to address topical subjects in the field of neurology to stimulate discussion focused on these issues. Articles have been chosen for their evaluation of current practices and research and their discussion of future innovations that directly affect neurologists and other practitioners involved in the care […]

Assessment and Treatment of Myoclonus: A Review