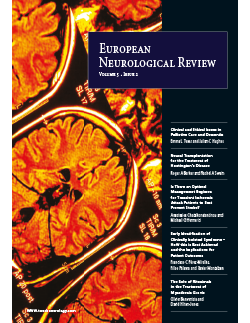 Knowledge on the genetic background of a number of neurological disorders has tremendously increased in the last years. The European Federation of Neurological Societies (EFNS) published guidelines for genetic testing in clinical practice in 2001 in two successive papers.1,2 A new EFNS task force has now revised the guidelines about genetic testing in the major […]

Foot drop is the inability to voluntarily dorsiflex the ankle and thereby lift the foot during the swing phase of gait. Foot drop is characterised by dragging the foot, which causes tripping or a steppage gait where the person raises their knee high during swing phase to avoid tripping over the hanging down foot and […]

The term ‘dementia’ is used to describe a decline in intelligence, memory and judgement as a result of brain disorders. The following cognitive deficits are common in dementia: impaired judgement (decline in intellectual performance and critical thinking), deficits in logical thinking and deductive reasoning, inability to understand or process information, memory deficits and loss of […]

Clinical and Ethical Issues in Palliative Care and Dementia – An Overview

Dyskinesia – Advances in the Understanding of Pathophysiology and Possible Treatment Options

Since its introduction in the 1960s, dopamine replacement therapy with its metabolic precursor L-3,4-dihydroxyphenylanaline (L-DOPA) has remained the most effective pharmacotherapy for Parkinson’s disease (PD).1 Particularly in early disease, it is efficiently converted into dopamine, replacing that which is lost through the degeneration of nigrostriatal dopaminergic neurons. In doing so, L-DOPA alleviates bradykinesia and rigidity, […]

Neural Transplantation for the Treatment of Huntington’s Disease

Roger A Barker, Rachel A Swain

Huntington’s disease (HD) is a progressive neurodegenerative disorder that is inherited and characterised by involuntary movements, psychiatric and cognitive symptoms and signs. It is caused by an expansion of the CAG repeat in exon 1 of the huntingtin gene. Patients with 36 or more CAG repeats in this gene develop HD; this abnormal expansion results […]

Huntington’s Disease Huntington’s disease (HD) is an autosomal-dominantly inherited neurodegenerative disorder. It has a prevalence of 5–7 per 100,000 people in European and North American populations.1 The first symptoms typically appear between the ages of 35 and 45 years and include minor uncontrollable movements and personality changes such as depression and irritability.1

Huntington’s disease (HD) is a monogenetic disorder with a spectrum of clinical features. Besides the characteristic involuntary motor disturbances, such as chorea, individuals affected by the disease suffer from psychiatric symptoms and cognitive decline.1–3 Despite this, focus on the movement disorder in clinical practice and the research of HD has been strong.

Neuroimaging opens the possibility of non-invasive investigation of structural and dynamic processes in the human brain in vivo. It is a helpful tool to explore the impact of structural and functional changes at the cortical and subcortical level in different neurological and psychiatric pathologies. Magnetic resonance imaging (MRI) with its various applications is one of […]

Is There an Optimal Management Regimen for Transient Ischaemic Attack Patients to Best Prevent Stroke?

The classic definition of transient ischaemic attacks (TIAs), based on focal neurological deficits most likely due to cerebrovascular diseases with full recovery within 24 hours, dates back to the 1960s.1 With the advent of advanced neuroimaging techniques (computed tomography [CT] and magnetic resonance imaging [MRI]), new insights into pathobiology and prognosis of cerebrovascular events, as […]

Stroke induces acute deficits of motion, sensation, cognition, emotion and communication that may occur in isolation or in various combinations depending on the location and size of the infarct lesion. Stroke lesions develop dynamically from the initial lesion corresponding to the area of restricted water diffusion (cytotoxic oedema), which enlarges in most cases into the […]

Paraneoplastic neurological syndromes (PNS) were first described in the 20th century. A summary of observations dating back to 1982 was published in the seminal book by Henson and Urich.1 The detection of autoantibodies for myasthenia gravis (MG) and later for Lambert-Eaton myasthenic syndrome (LEMS), marked a new era of antibody-mediated disease. Several onconeural antibodies were […]

Many of the disease-modifying therapies (DMTs) that are available for the treatment of multiple sclerosis (MS) require frequent administration by subcutaneous or intramuscular injections. Current first-line therapies include interferon beta-1a (INFβ-1a), INFβ-1b and glatiramer acetate. INFβ-1a is available as two formulations: Avonex® is administered as a once-weekly intramuscular injection and Rebif® is injected subcutaneously (SC) […]

The introduction of disease-modifying drugs (DMDs) during the 1990s made chronic therapies that inhibit the disease process in multiple sclerosis (MS) available to patients for the first time.1,2 While the currently available DMDs decrease the number of relapses, delay the onset of disabilities, improve quality of life (QoL) and allow increased participation in work and […]

Multiple sclerosis (MS) is a chronic disease of the central nervous system (CNS) that mainly affects young adults and is characterised by an inflammatory demyelination of different areas of the CNS occurring at different time points. MS has several forms of presentation, including episodic subacute periods of worsening (the most common, initially), gradual progressive deterioration […]

The Role of Rituximab in the Treatment of Myasthenia Gravis

Myasthenia gravis (MG) is an autoimmune disease associated with circulating antibodies, either against the nicotinic acetylcholine receptor (anti-AChR; ~80% of patients with generalised MG) or muscle-specific tyrosine kinase (anti-MuSK, 10% of patients),1 that induce a dysfunction of neuromuscular transmission owing to loss of functional receptors. Less commonly, MG remains confined to the ocular muscles. Only […]