I am delighted to introduce a new report from Alzheimer Europe highlighting the existing inequalities in access to dementia care and treatment across Europe. The report, ‘European Dementia Monitor 2017: comparing and benchmarking national dementia strategies and policies’, assesses which countries provide the most dementia-friendly policies and guarantee the best support and treatment of people with dementia and their carers.1

When I started working for Alzheimer Europe 20 years ago, there was little recognition that dementia constituted a public health challenge. Thanks to, for example, the campaigning of national Alzheimer associations and individual people with dementia and their carers, this has now completely changed. A contributing factor to the increased quality of care in most European countries is certainly also more research and extensive public education. Dementia is a major cause of disability and dependency among older people worldwide, having a significant impact not only on individuals but also carers, families, communities and societies.

Dementia is known to be more prevalent in an ageing population and by 2060 28% of the population will be aged over 65 years and 12% aged over 80 years.2 As Europe’s population ages, there will be an increase in age-related diseases and one of the most prevalent of these is dementia. In 2030, it is predicted there will be 13.4 million people in Europe living with dementia.3 In 2008, the cost per person with dementia was about EUR 22,000 per year, while it was somewhat lower for the wider EU sphere and for the whole of Europe. The total societal costs per case were estimated to be eight-times more in Northern Europe than in Eastern Europe.4

For the reasons above, Alzheimer Europe surveyed its national associations on the current state of care treatment research policies and law in the field of Alzheimer’s disease, in order to identify differences between countries as well as common trends and potential good practices and existing trends. The new report provides a benchmark of national dementia policies which compares and rates the responses of European countries to the dementia challenge. The survey covered all Member States of the European Union (with the exception of Estonia), plus Albania, Bosnia and Herzegovina, Jersey, Israel, Monaco, Norway, Switzerland and Turkey.

According to the findings of the European Dementia Monitor, no country excelled in all ten categories and there were significant differences between European countries. 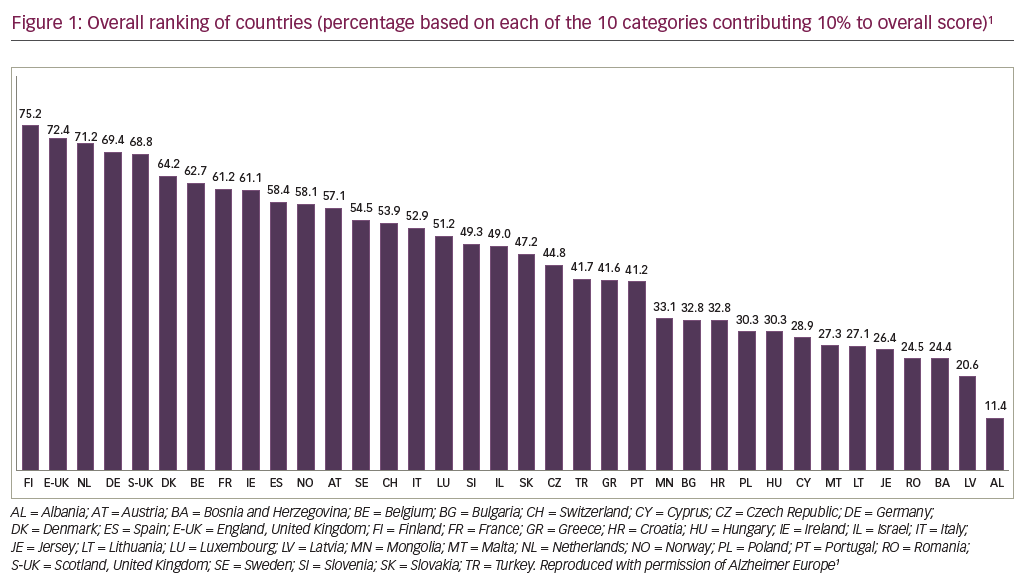 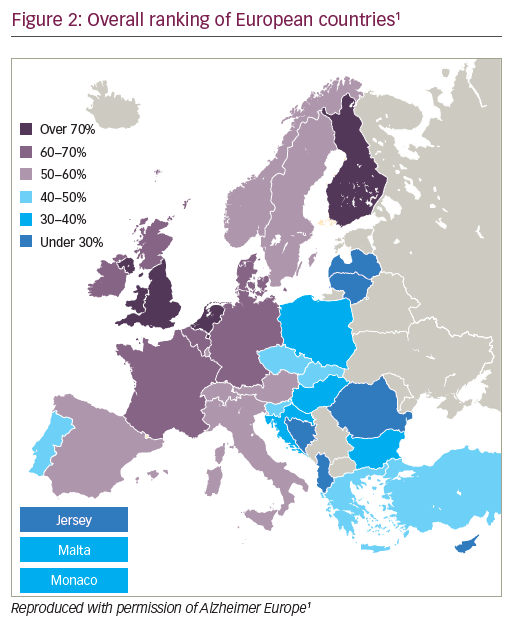 ‘Our organisation has been lobbying for the recognition of dementia as a public health priority and called on European governments to develop national dementia strategies. The aim of the European Dementia Monitor is to asses which countries provide the most dementia-friendly policies and guarantee the best support and treatment of people with dementia and their carers.’ – Jean Georges, Alzheimer Europe

This article is a short opinion piece and has not been submitted to external peer reviewers. A member of the Editorial Board reviewed the article before publication.

The named author meets the International
Committee of Medical Journal Editors (ICMJE) criteria
for authorship for this manuscript, takes responsibility
for the integrity of the work as a whole and has
given final approval for the version to be published.

No funding was received in the publication
of this article.

This article is published under the
Creative Commons Attribution Noncommercial License,
which permits any non-commercial use, distribution,
adaptation, and reproduction provided the original
author(s) and source are given appropriate credit.