Decline in cognitive function, such as memory impairment, is one of the most commonly reported symptoms in cancer patients. Importantly, cognitive impairment is not restricted to patients treated for brain tumors, but also frequently present in patients treated for tumors outside the nervous system. Recent discoveries from preclinical and translational studies have defined various risk factors and mechanisms underlying such symptoms. The translation of these findings into clinical practice will improve patient management by limiting the degree of neurotoxicity from current therapies, and by exploring novel mechanisms of brain repair.

Neurocognitive function is commonly compromised in cancer patients. While symptoms can be caused by the tumor itself and are commonly seen in patients with brain tumors, the etiology of neurocognitive deficits is much more complex in patients treated for tumors outside the nervous system.

Impaired cognition can be present in cancer patients prior to treatment; however, treatment related adverse effects from c hemotherapy and radiation are well known to cause harmful effects on the brain and play a significant role in the development and progression of neurocognitive symptoms.1 In addition, various co-morbidities, mood and sleeping disorders, and medication effects can affect neurocognitive function (see Figure 1). It therefore can be difficult to delineate the exact contribution of each of these factors in clinical practice, posing a significant challenge to patient management.

As disruption in neurocognitive function can be a major cause of impaired quality of life, attention to these symptoms and consideration of possible therapeutic interventions directed to improve neurocognitive deficits have become increasingly important in clinical oncology and cancer survivorship.

Symptoms can be of delayed onset and progressive for years after cessation of tumor therapy. While neurocognitive adverse effects from chemotherapy have long been recognized in long-term survivors of childhood cancer,3,4 adult cancer patients can be equally affected, and chemotherapy associated cognitive dysfunction appears to be more common than previously anticipated.1,5-8 Cognitive dysfunction has been reported in 15–95% of patients treated with chemotherapy,5,6,9 depending on study design, patient population and the battery of neuropsychological tests administered. While cognitive impairment has been confirmed in patients treated for various cancer types,10–12 most compelling studies were done in breast cancer patients, of whom 20–40% show cognitive deficits on post-treatment evaluation.6,8,13–18 Symptoms might be of delayed onset and follow a progressive pattern. Approximately 30–60% of breast cancer survivors demonstrate cognitive deficits even up to 20 years after active cancer therapy.18–20

Experimental studies have revealed insights into the underlying mechanisms of cognitive dysfunction in cancer patients. Specifically, a large number of animal studies have discovered the cell-biological effects of various chemotherapeutic drugs on the central nervous system.21 Neurocognitive adverse effects have been observed with all categories of chemotherapeutic 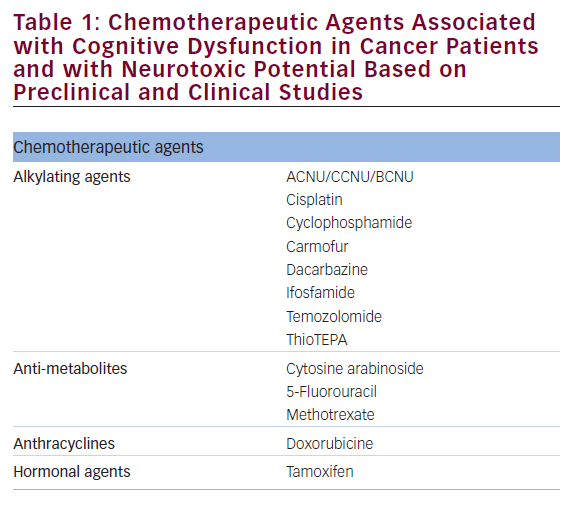 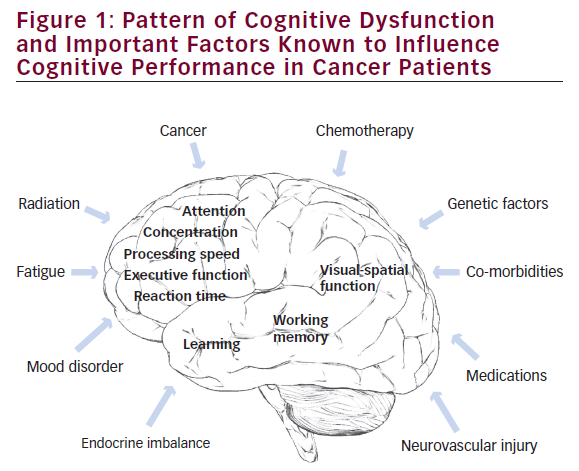 The current body of literature suggests that disruption of neural progenitor cells required for maintenance of brain plasticity throughout life and impairment of hippocampal neurogenesis are important etiologic factors underlying behavioral and cognitive abnormalities.21,30–35 However, effects of chemotherapy on the nervous system have mostly been studied in non-tumor bearing rodent models, and have therefore not been able to address the concern that the tumor itself might influence neurocognitive function, as suggested by some clinical studies.

Nevertheless, chemotherapy-induced damage to neural progenitor cells has offered a compelling explanation for delayed and progressive neurotoxic effects of chemotherapy.

Clinical studies have shown that the risk of developing neurocognitive symptoms is also influenced by metabolic alterations, hormonal changes, the level of cognitive function prior to treatment and other medical co-morbidities, and genetic factors.1,36–42

Figure 1 summarizes the most common neurocognitive deficits reported in cancer patients and illustrates various conditions and clinically relevant factors known to influence cognitive performance and that need to be considered in clinical management.

In light of the spectrum of neurocognitive symptoms encountered in cancer patients and the increasingly recognized cell-biological effects of chemotherapy on the brain, some authors have proposed the concept of accelerated aging of the nervous system as a consequence of chemotherapy.43

Diagnostic and Therapeutic Considerations
Assessment of neurocognitive function requires reliable, quantifiable, and valid measures, sensitive to cognitive and quality of life deficits in cancer patients. Testing strategies that closely relate to real-life situations, in which cognitive deficits readily manifest, are considered most relevant. Several guidelines have been developed regarding the selection of neuropsychological tests that efficiently capture cognitive function and that can be uniformly applied to cancer patients.8,44–46 In addition, the identification of novel biomarkers to identify and monitor chemotherapy associated cognitive changes remains an important objective of ongoing investigations. Recent translational imaging studies using structural and functional magnetic resonance imaging (MRI) have identified compelling evidence for chemotherapy-related brain changes.47

There are currently no standard therapies for patients who experience cognitive symptoms following chemotherapy. Therapeutic interventions may include strategies to either prevent side effects, or to minimize the severity of symptoms. For instance, neurostimulants, such as methylphenidate48–50 and modafenil51,52 are promising agents for treatment of cancer therapy related cognitive dysfunction. In addition, donepezil – a reversible acetylcholinesterase inhibitor used to treat Alzheimer’s type dementia – has shown to improve cognitive function, mood, and quality of life in patients with brain and small cell lung cancer.53,54

Optimal management of fatigue, mood disorders and other co-morbidities need to be integral part of patient management. Notably, treatment of a sleep disorder or depression may eliminate cognitive deficits if those disorders are the primary cause. Cognitive and behavioral intervention strategies may also be employed in patients with chemotherapy associated cognitive dysfunction.55 These interventions often focus on compensatory strategies, stress management, energy conservation and psycho-education. External memory aids (e.g., memory notebooks, pagers) have been among the most widely used interventions.56

Other non-pharmacological interventions include meditation,57 exercise,58,59 and regulation of sleep.60

Challenges and Outlook
Numerous preclinical and translational neuroimaging studies in cancer patients have started to shed light on the structural and functional impact of chemotherapy on the brain.61

However, translating these findings into clinical practice has remained challenging.

Improved study design (e.g., longitudinal and prospective, use of comparable testing batteries and incorporation of advanced neuroimaging protocols), and study of more homogenous patient populations with comparable treatment regimens in clinical trials will be important to obtain more conclusive evidence on the impact of chemotherapy on the brain. Importantly, not all patients experience neurotoxic adverse effects of chemotherapy, and significant heterogeneity exists in the degree of symptoms among affected cancer patients.

To delineate the exact mechanisms of how chemotherapy alters brain function and to identify associated risk factors will help to develop brain repair strategies that can be incorporated into clinical practice.

Jörg Dietrich received support from the National Institute of Health, the American Academy of Neurology Foundation, and the American Cancer Society. Jörg Dietrich also received generous philanthropic support from the family foundations of Sheila McPhee, Ronald Tawil and Bryan Lockwood. Jochen Kaiser has nothing to declare in relation to this article. No funding was received for the publication of this article.