Mixed dementias are clinically under-recognised and need neuropathological confirmation. The most frequent types are those composed of Alzheimer’s dementia (AD) associated with cerebral amyloid angiopathy (CAA), cerebral arteriosclerotic micro-angiopathy (CAMA) and Lewy body disease (LBD). The present neuropathological study with 7.0-tesla magnetic resonance imaging (MRI) compares the impact and the distribution of cerebrovascular lesions between unmixed AD brains to those with different types of associated disorders. Twenty-six unmixed AD brains were compared to 12 associated with LBD, eight with CAMA and 24 with CAA. On neuropathological examination brains with AD-CAA had the most severe cerebrovascular lesions, those with AD-CAMA had a higher number of lacunes and in the AD-LBD brains only an increase of cortical micro-infarcts was observed. On MRI examination, white matter changes were only increased in the AD-CAA group. Cortical micro-infarcts were significantly more frequent in all the sections of the AD-CAA and AD-CAMA groups. In the AD-LBD brains, they were only moderately more common in the occipital section. Cortical micro-bleeds were observed in all mixed dementia cases. A moderate amount of superficial siderosis was only seen in the AD-CAA brains. The present study confirms our previous findings that CAA and CAMA are the main causes of occurrence of different cerebrovascular lesions in the mixed AD brains.

The occurrence of mixed dementias is significantly related to the aging process.1 Their brain pathology accounts for most cases in community-dwelling older persons.2 Mixed dementias are clinically under-recognised and need neuropathological confirmation.3 The most frequent types are those composed of Alzheimer’s dementia (AD) associated with cerebral amyloid angiopathy (CAA), cerebral arteriosclerotic micro-angiopathy (CAMA), and Lewy body disease (LBD).4,5 AD-CAA is by far the most frequent association,6 while CAA mainly involves the leptomeninges and the cerebral cortex, and CAMA mainly affects the basal ganglia with white matter changes.7 Cortical micro-infarcts are not only frequent in AD-CAA but also in LBD.8,9 Additionally, cortical micro-bleeds are increased in the mixed dementia diseases.10

Post-mortem magnetic resonance imaging (MRI) is an additional tool of the neuropathological examination of neurodegenerative and cerebrovascular diseases, as it allows quantification and location of white matter changes, cortical micro-infarcts, cortical micro-bleeds and iron deposits, and is able to detect the areas of cortical superficial siderosis.11 The present neuropathological study with 7.0-tesla MRI compares the impact and the distribution of cerebrovascular lesions between unmixed AD brains to those with the different types of associated disorders.

A total of 80 patients with unmixed and mixed AD, who had been followed up at the Lille University Hospital, underwent an autopsy. Twenty-six unmixed AD brains were compared to 12 associated with LBD, eight with CAMA and 24 with CAA. Mean age, gender distribution and the different types of cerebrovascular lesions were compared.

AD features were classified according to the Braak and Braak criteria.12 The main diagnosis of AD was retained when stages V and VI were reached. The criteria of a consensus protocol were used to assess the severity of CAA.13 The degree of CAA was evaluated semi-quantitatively on four cortical samples and graded from 0–3. Only brains with grade 3 in all samples were considered to have CAA. LBD was diagnosed according to the report of the consortium on DLB international workshop.14 Staging of the CAMA pathology was performed according to the recommendations of the vascular dementia group.15

In addition to the detection of macroscopic visible lesions such as haematomas and territorial and lacunar infarcts, a whole coronal section of a cerebral hemisphere, at the level of the mamillary body, was taken for semi-quantitative microscopic evaluation of the small cerebrovascular lesions such as white matter changes, cortical micro-bleeds, cortical micro-infarcts, and lacunes. The mean values of white matter changes were the average of the ranking scores: no change (R0), a few isolated (R1), frequently scattered in the corona radiata (R2), and forming confluent lesions (R3) of myelin and axonal loss. For the other cerebrovascular lesions, their mean values corresponded to their average numbers in the individual brains.

A 7.0-tesla MRI (Bruker BioSpin SA, Ettlingen, Germany) was used with an issuer-receiver cylinder coil of 72 mm inner diameter (Ettlingen, Germany), according to a previously described method.16 Three coronal sections of a cerebral hemisphere were submitted to SPIN ECHO T2 and T2* MRI sequences: a frontal, a central and a parieto-occipital one. The ranking scores of severity of white matter changes were evaluated separately on different brain sections using the same method as was performed on the neuropathological section. The number of the other small cerebrovascular lesions was also determined by consensus evaluation. The incidence of cortical superficial siderosis, not associated to a visible underlying lesion, was also evaluated on the T2* sequence.17

Univariate comparisons of unpaired groups were performed with the Fisher’s exact test for categorical data. The non-parametric Mann-Whitney U-test was used to compare continuous variables. The significance level, two-tailed, was set at ≤0.05 for moderately significant, at ≤0.01 for significant and at ≤0.001 for highly significant. 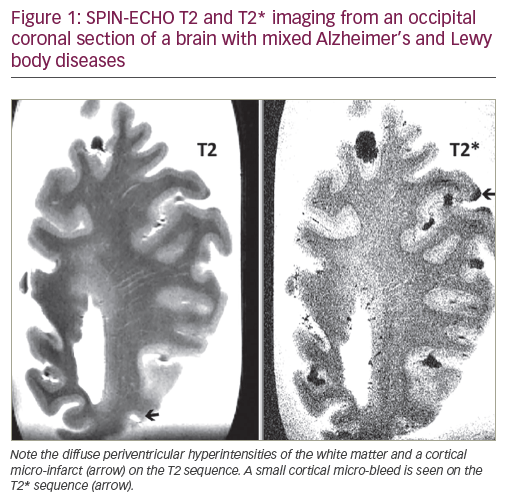 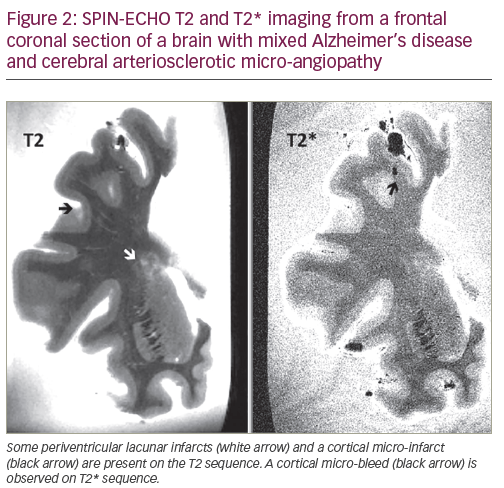 On MRI examination, white matter changes were only increased in the AD-CAA group, mainly in the central section. Cortical micro-infarcts were significantly more present in all the sections of the AD-CAA and AD-CAMA groups. In the AD-LBD, brains they were only moderately more common in the occipital section, compared to the unmixed AD group (Figure 1). Cortical micro-bleeds were significantly more frequent in all the sections of AD-CAA and AD-CAMA brains (Figure 2), while in the AD-LBD group they occurred more frequently in the frontal section and, to a lesser degree, in the central one. Although cortical superficial siderosis was only observed in the AD-CAA brains (Figure 3) but not in the other mixed and unmixed AD diseases, the incidence was too low to be considered as statistically significant (Table 2). 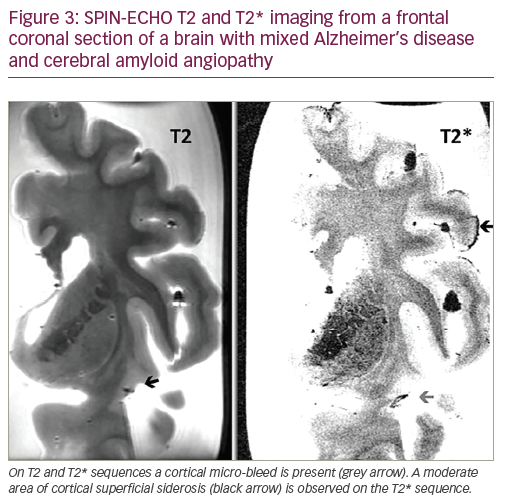 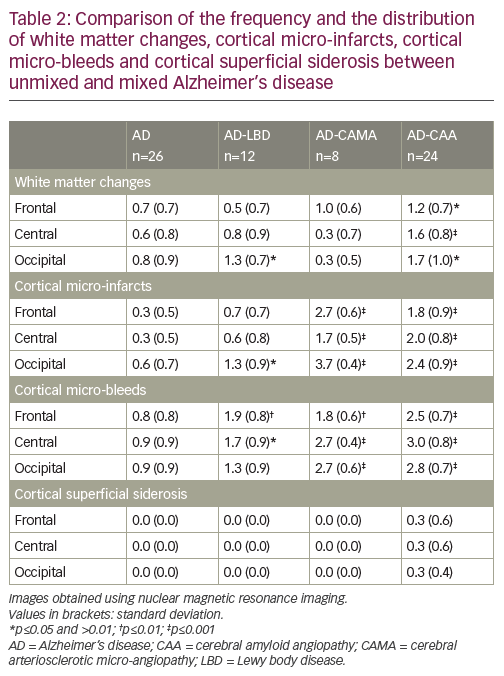 The present study confirms our earlier findings that CAA and CAMA are the main causes of occurrence of different cerebrovascular lesions in mixed AD brains.18,19 However, now we have also differentiated the impact of these lesions between AD-CAA and AD-CAMA, with a more severe cerebrovascular burden in the former group. In addition, it is shown that lacunar infarcts are more frequent in the AD-CAMA group, as already demonstrated in pure vascular dementia brains.20 Lacunar infarcts are mainly observed in the centrum semiovale.21

Aside from being a member of the
journal’s editorial board, Jacques L De Reuck has
nothing to declare in relation to this article.

All procedures were
followed in accordance with the responsible committee
on human experimentation and with the Helsinki
Declaration of 1975 and subsequent revisions. A
previously obtained informed consent of the patients,
or from the nearest family, allowed an autopsy for
diagnostic and scientific purposes. The brain tissue
samples were acquired from the Lille Neuro-Bank of the
Lille University, federated to the ‘Centre des Resources
Biologiques’ that acted as an institutional review board.

The named author meets the International
Committee of Medical Journal Editors (ICMJE) criteria
for authorship of this manuscript, takes responsibility
for the integrity of the work as a whole, and has
given final approval to the version to be published.

This article is published under the
Creative Commons Attribution Noncommercial
License, which permits any non-commercial
use, distribution, adaptation and reproduction
provided the original author(s) and source are
given appropriate credit. © The Authors 2018.