Alzheimer’s disease (AD) is rapidly becoming more common as the global population ages. New treatments are needed and new approaches to drug development are warranted. The phase II challenge for AD treatment development programs is how to provide proof-of-concept (POC) of the candidate agent without a large long trial equivalent to phase III. We propose that the available data support measures of the default mode network (DMN) using functional magnetic resonance imaging (fMRI) as demonstrating the effect of treatment on cognitive circuits critical to human cognition. Improved DMN function with symptomatic cognitive enhancing agents or decreased deterioration of DMN function compared to placebo in trials of disease-modifying agents would support POC and allow progression to phase III with greater confidence.

Alzheimer’s disease (AD) is approaching epidemic proportions as the world’s population ages and the number of victims of this age-related disorder soars.1 At the same time that this tsunami of affected individuals looms, there has been little progress in developing new therapies, either symptomatic drugs to relieve the symptoms of AD or disease-modifying therapies (DMTs) to prevent, delay onset, or slow progression. No new novel treatment of AD has been approved since 2003 and 100% of DMTs in development have failed.2

Drug development progresses from preclinical studies in animals to phase I trials involving normal volunteers, to phase II “learning” trials in small populations of AD patients, to phase III confirmatory trials that demonstrate safety and efficacy prior to seeking marketing approval and making treatments widely available to patients. Phase II establishes proof-of-concept (POC) and determines the optimal doses to be included in phase III trials.3 Phase III is the longest phase of drug development, includes the largest number of patients, and consumes the largest share of resources. Thus, only agents that have demonstrated POC efficacy in phase II should be advanced to phase III. Stopping development of ineffective drugs in phase II will save resources that can be devoted to other projects and will save exposing patients to drugs and side effects in futile trials. Many drugs that have failed and many in the current AD pipeline have not shown POC in phase II before proceeding to phase III. A high failure rate can be anticipated among these agents. 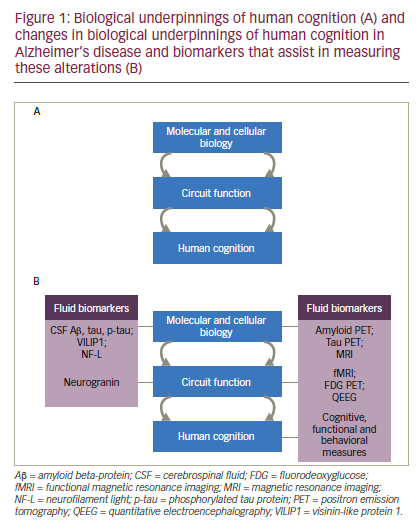 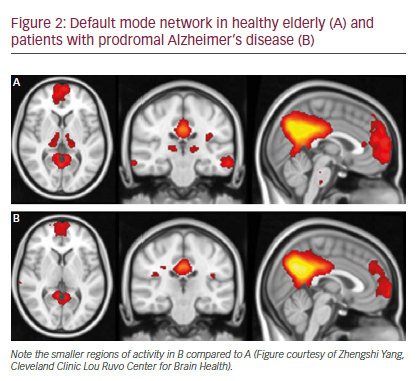 These studies suggest that fMRI DMN provides insight into drug effects often currently lacking in phase II development programs. They may be relevant to both DMTs and symptomatic cognitive enhancing therapies. Abnormalities are detectable early, suggesting that they can be used in prevention trials of at-risk individuals and treatment trials of persons with prodromal AD or mild AD dementia. They are sensitive measures, allowing POC trials to be completed in shorter periods of time with smaller sample sizes than conventional phase II trials. Correlations with cognitive measures suggest that drugs or drug doses not improving DMN function in trials of cognitive enhancing agents or not preserving the function better than placebo in DMT trials are unlikely to produce a cognitive benefit in longer larger trials. Resting state measures are collected without asking participants to perform cognitive tasks and may be applicable to trials involving individuals across a broad range of severity and in global settings. Standard protocols will be required for multi-site trials, but relatively few specialized sites may be needed for POC studies.

An unresolved conundrum for phase II of drug development is whether to require demonstration of cognitive benefit.16 Trials designed to show robust clinical benefit must be large and long and therefore are similar or identical to trials required for phase III. Taking time to determine clinical responses consumes patent life, making long phase II trials untenable. This has led some sponsors to skip phase II, proceeding directly from animal studies and human safety trials to phase III. Within this paradigm, there is relatively little opportunity to understand the candidate treatment, explore dose relationships, accrue safety data, or collect biomarker data possibly predictive of phase III efficacy. Phase II trials measuring amyloid or tau burden or CSF measures involving Ab, tau, and p-tau may take longer to demonstrate and, even if positive but insufficient to affect circuit function, might not accurately forecast clinical benefit. DMN measure relates directly to cognitive function and may optimize demonstration of POC in phase II.

The fMRI technique has not been established as a surrogate measure that predicts clinical outcomes. We suggest that the current data warrant further investigation and that development programs explore the potential utility of DMN measures to assess drug and dose effects systematically and to determine if this approach, when incorporated in phase II, allows better prediction of phase III outcomes.

Jeffrey Cummings acknowledges support of a COBRE grant from the NIH/MIGMS (P20GM109025) and Keep Memory Alive.
Authorship: All named authors meet the International Committee of Medical Journal Editors (ICMJE) criteria for authorship of this manuscript, take responsibility for the integrity of the work as a whole, and have given final approval to the version to be published.