Neuropathological examination of post-mortem brains of patients with dementia due to neurodegenerative and cerebrovascular changes remains important, as the family wants to be sure about the clinical diagnosis and the risk of a hereditary disease. 7.0-tesla magnetic resonance imaging (MRI) can be applied as an additional tool to examine post-mortem brains of patients with neurodegenerative and cerebrovasular diseases. It allows examination of serial coronal sections of a cerebral hemisphere and horizontal sections of brainstem and cerebellum and comparison with the neuropathological lesions. Post-mortem MRI can show the degree and the distribution of the cerebral atrophy. Additional small cerebrovascular lesions can be quantified. The degree of iron load, not due to microbleeds, can be evaluated in different basal ganglia and brainstem structures. Three to six serial sections of a cerebral hemisphere and one section of brainstem and cerebellum allow the evaluation of the most important brain changes and to select the small samples to be used for histological diagnostic purposes. These correlation studies are extremely important for the future, when more 7.0-tesla MRI machines will be available for in vivo clinical-radiological diagnosis. This article is a review of post-mortem MRI data in the brains of patients with neurodegenerative and vascular dementias.

Although post-mortem neuropathological examination is increasingly performed less often in most western countries, it is still needed in patients with dementia, due to neurodegenerative and cerebrovascular changes, It is important for the family to be sure about the clinical diagnosis and to exclude the risk of a hereditary disease. Clinicalneuropathological correlation studies actually show only a concordance rate around 65%.1 A previously informed consent of the patients or from the nearest family must be obtained to allow an autopsy for diagnostic and scientific purposes.

Neuroimaging during life with 1.5 and 3.0-tesla magnetic resonance imaging (MRI) contributes moderately to the clinical diagnosis. There is hope that 7.0-tesla MRI will be more helpful, but actually only a few neurological centres utilise this technique and only a few clinicalradiological correlation studies have been performed until now.2Postmortem correlation studies combining MRI and histopathology are needed to validate the 7.0-tesla MRI findings in vivo when more centres will utilise of this technique.3 This article reviews what is currently known about post-mortem MRI data in the brains of patients with neurodegenerative and vascular dementias.

Though a definitive post-mortem diagnosis still needs to be confirmed by an extensive macroscopic and microscopic examination of the brain using validated neuropathological criteria,4 7.0-tesla MRI can be used as an additional tool to examine post-mortem brains of patients with neurodegenerative diseases. The degree and the distribution of the cerebral atrophy and white matter changes (WMCs) can be demonstrated. It also detects lesions that can be selected for histological examination. Additional small cerebrovascular lesions can be quantified. The degree of iron load can be evaluated in different basal ganglia and brainstem structures.

A variety of post-mortem MRI techniques have been used including scanning of fixed whole brains or hemispheres,5 coronal brain slices,6 un-fixed whole brains7 and brains in situ.8 The number of detected small cerebrovascular lesions depends on the MRI characteristics, such as pulse sequence, sequence parameters, spatial resolution, magnetic field strength and image post-processing.9 8.0-tesla MRI was shown to be significantly more sensitive to detect small cerebrovascular lesions than 1.5 and 3.0-tesla MRI in postmortem brains.10

Author’s experience with 7.0-tesla MRI
In our experience, we used a 7.0-tesla (Bruker Biospin SA, Ettlinger, Germany) with an issuer-receiving cylinder coil of 72 mm inner diameter, initially employed for animal experiments. Formalin fixed brain sections were placed in a plastic box and filled with salt-free water after cleaning the formalin fixation.11 Serial coronal MRI sections of a cerebral hemisphere and horizontal sections of brainstem and cerebellum were compared to the lesions, observed on macroscopic and histological examination.

Additional histological examination of a separate standard coronal section of a cerebral hemisphere at the level of the mammillary body, allowed quantification of small lesions and validation of the MRI findings.13

Cerebral atrophy
Cerebral cortical atrophy on MRI allows comparison to the findings of the macroscopic examination of coronal sections of the brain. Due to the better differentiation between gray matter and WMCs, MRI has the advantage of better differentiation between atrophy, due to cortical lesions and those due to white changes. The most severe atrophy of the frontal and temporal lobes is observed in frontotemporal lobar degeneration (FTLD).13 The degree of hippocampal atrophy correlates well with the histological staging of severity in Alzheimer’s disease (AD) (Figure1).14 In progressive supranuclear palsy (PSP) severe atrophy of the whole brainstem is demonstrated.15 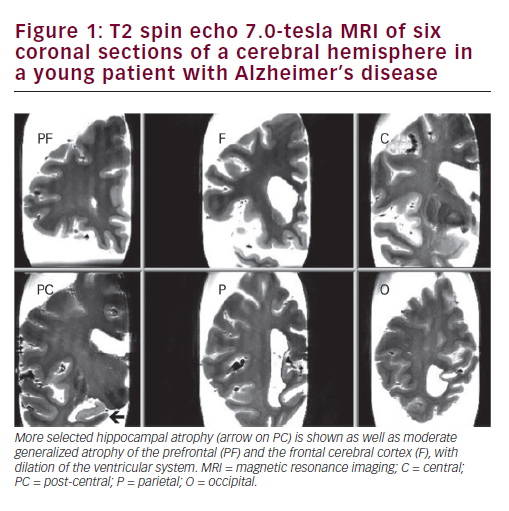 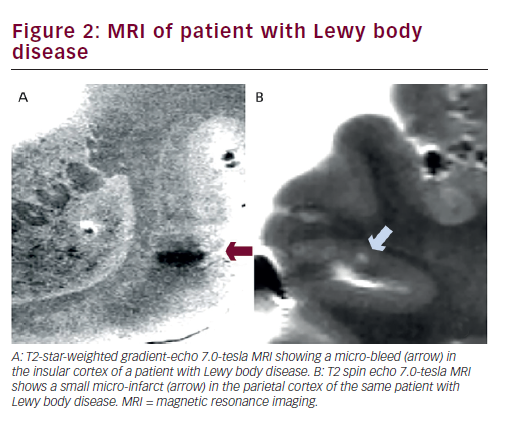 post-mortem 4.7-tesla MRI reveals no significant differences between the imaging of WMCs and the neuropathological assessments, regardless of their severity.5 Post-mortem MRI studies show severe WMCs in small-vessel disease and cerebral amyloid angiopathyi.18 Until now, only a few studies have addressed the demonstration of lacunar infarcts.19 WMCs are frequently observed in the frontal lobe of FTLD.20 On 7.0-tesla MRI they represent the extensive white matter looseness underlying the severe cortical atrophy, due to Wallerian degeneration.13

The reliability to detect micro-bleeds in the cerebral cortex on 7.0-tesla MRI is 96%, while much lower in the other cerebral regions.11 Due to the 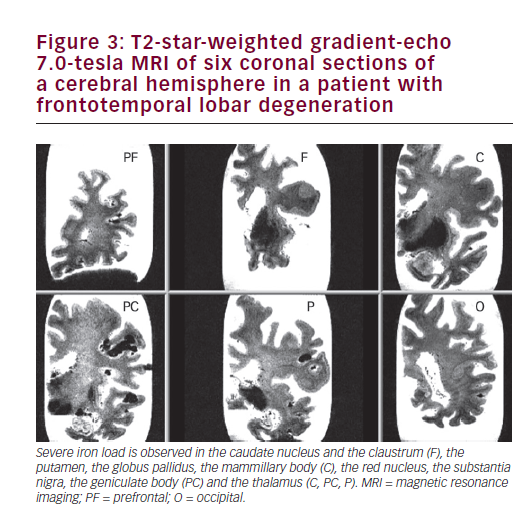 blooming effect also small cortical mini-bleeds, not seen on naked eye examination of the brain, can be detected. However, as the blooming effect differs from one specimen to another, due to the individual composition of the bleed, distinction between micro- and mini-bleeds cannot been made on post-mortem MRI.11

In AD-CAA brains the CoMBs predominate in the parietal inferior gyrus, the precuneus and the cuneus compared to those with ‘pure’ AD.12 In FTLD they are predominantly seen in the superior and inferior frontal, and in the superior temporal gyri, corresponding to the location of the most severe histological lesions.23 In Lewy body disease (LBD) CoMBs predominate in the frontal regions and are not related to the frequently associated AD and CAA features.24 Overall CoMBs occur preferentially in the deep cortical layers.25

Cortical micro-infarcts Cortical micro-infarcts (CoMIs) are considered as the invisible lesions in clinical-radiological in vivo studies.26 Post-mortem 7.0-tesla MRI, in contrast to clinical-radiological correlation studies in vivo, allows the demonstration of CoMIs of different sizes in the cerebral hemispheres. According to the length of the cortical occluded branch, CoMIs can involve the whole depth of the cerebral cortex or only the superficial, the middle and the deep cortical layers separately or combined. They predominate in vascular dementia (VaD), AD-CAA and LBD. In the latter only the small laminar CoMIs are observed (Figure 2B).27

Cerebellar CoMIs are of similar size, as only one type of cortical branch exists. They are mainly due to arteriosclerotic disease rather than due to CAA.28

Cortical superficial siderosis
Cortical superficial siderosis (CSS) is defined as a characteristic curvilinear pattern of low signal on blood-sensitive MRI sequences, preferentially affecting the cerebral convexities.29 It is due to blood residues in the subpial layers and reflects an underlying cortical hemorrhagic lesion.30 Post-mortem 7.0 tesla MRI detects much better, the underlying cortical lesions than in-vivo studies with 1.5 and 3.0-tesla machines. CSS is found to be associated to cortical bleeds as well as to infarcts.31 Most cerebral infarcts become partly hemorrhagic during their chronic stage.32 CSS can also be the hallmark of a cerebral contusion in case of head injury.33

Iron deposition
Iron deposition in the brain is associated with general cognitive ability and cognitive aging.34 A meta-analysis reported that several articles from one laboratory showed a significant increase of iron in the neocortex of AD brains, whilst seven other laboratories fail to reproduce these findings, challenging the hypothesis that transition metal overload accounts for oxidative injury in this disease.35

The 7.0-tesla Bruker Biospin is much less expensive than the 7.0-tesla MRI machines used for in vivo studies. Although mainly used for animal experiments, it is quite adapted for examination of human brain sections. In addition, these post-mortem correlation studies will allow the validation of the images that will be obtained when 7.0-tesla MRI machines will be more available in clinical practice.

Jacques L De Reuck has nothing to declare in relation to this article.

This article involves a review of the literature and did not involve any studies with human or animal subjects performed by the author.