Social media platforms, such as Twitter, are increasingly used by clinicians, including neurologists. Twitter represents a convenient means to reach out to fellow clinicians, researchers and patients alike. To make maximum use of these platforms, they must be used pragmatically and within the ambit of ethical principles that guide all medical practice. As neurologists, familiarizing ourselves with the technical know-how and potential uses of Twitter empowers us best to use it as a valuable clinical and networking tool. Twitter offers diverse formats for a neurologist, thus enabling the creation and dissemination of specific types of information in the form of tweetorials, journal clubs, conference-based tweeting, tweetchats and the like. In this practical step-by-step guide, we demonstrate how to harness Twitter for myriad academic uses.

The surge in social media use seems to have become a sign of our times. Social media has ramified into not only our personal lives but, importantly, also our professional lives and will continue to do so in the future.1–4 At the same time, more neurologists resorted to online learning modalities, including podcasts and social media platforms such as Twitter, during the COVID-19 pandemic, even prompting the recent publication of ‘how to’ articles on creating ‘tweetorials’.5

Twitter is a microblogging social media platform that permits users to post messages (‘tweets’) of up to 280 characters. Additionally, tweets may be enhanced by attaching images, videos or hyperlinks, and users may also share others’ tweets by ‘retweeting’.

Given the ubiquitous nature of social media, particularly Twitter, it is increasingly unlikely that neurologists will be able to avoid this trend for long.6 However, clinicians carry great responsibility, including in the use of social media. In cardiovascular medicine, the promotion of articles via Twitter was shown to be associated with an increased number of citations,7 and this may apply to neurology as well. Indeed, using social media to disseminate scientific information might be especially relevant for neurologists compared with other healthcare professionals. Neurology has witnessed broader advances over recent years compared with other medical specialties. Twitter may be especially useful to neurologists, as it provides brief interactions, which help to offer a quick overview on a topic to people with cognitive issues (e.g. brain fog, attention/concentration deficits). However, one potential disadvantage of Twitter is its character limitation, which reduces the amount of information that can be imparted.8 This barrier may be overcome by a number of strategies, such as tweetorials.

The American Academy of Neurology recently authored a position statement about social media advocating for neurologists to act ethically when using online platforms. Neurologists should not see this as a deterrent from engaging in social media but as a reminder that neurologists represent their profession and institution in addition to their own views.9

Twitter is an easy-to-use, dynamic and versatile instrument that clinicians may harness in general to enhance academic outreach.6 In this pragmatic review, we aim to provide a stepwise guide for neurologists on the efficient and effective use of Twitter for a range of academic activities.

Twitter may be used by neurologists in multiple ways,6,10 and each method has specific advantages and disadvantages (Table 1). These methods may help neurologists to decipher the best way to present information on Twitter.

When using any of the Twitter formats described in Table 1, certain strategies may be used to foster wider outreach.

In this section, we will demonstrate how each of the methods mentioned above may be used in practice.

A tweetorial may be initiated by introducing the topic using a preamble (Figure 1A).11

Post further tweets in a logical sequence, each providing nuggets of information (Figure 1B).11

The tweetorial may be made more appealing by using different symbols or emoticons and by adding relevant links to increase its informative value (Figure 1C).11

Step 4. Wrap up the tweetorial with take-home messages

A summary message or key points are often useful to end the thread (Figure 1D).11

A tweetorial is, therefore, a visually appealing method to provide information to readers on a specific topic. 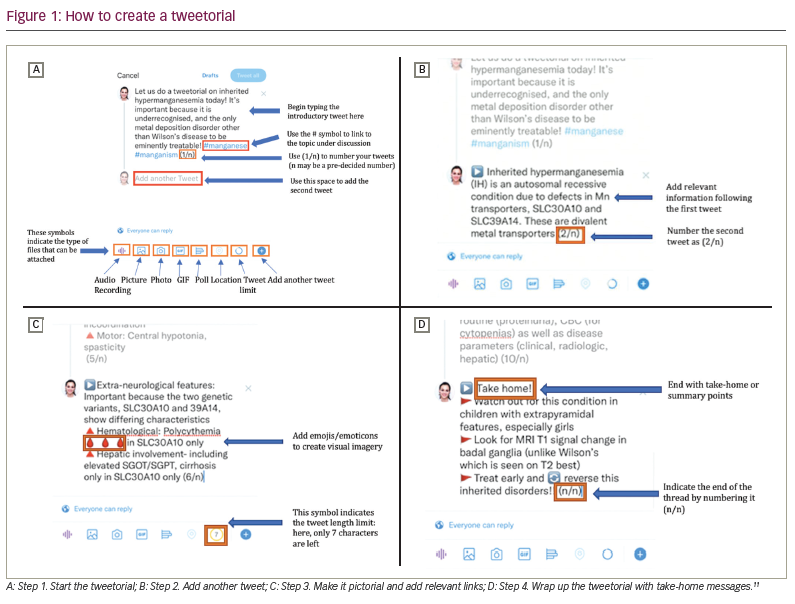 Step 1: Let people know that you are attending

Ideally, this should be done in advance with either a direct mention or an invitation to join a session. Using hashtags allows attendees and other interested parties to connect, as well as building momentum pre-conference.

Keep your followers updated with useful information and snippets from the presentations. Remember to add pictures of interesting slides. The presenter can be tagged (using the @ symbol) in the tweet.

Show people what is going on at the conference venue (Figure 2A).12

These can be direct questions seeking answers or to educate based on the knowledge acquired. The latter can be done as a poll to generate greater interest (Figure 2B).13

Twitter can be used to analyse and simplify the findings of a research paper (Figure 3).14

Introduce the paper and provide a link to the article.

Step 2: Delve into the details of the paper

Give details about the definitions used and the pathophysiology described in the paper (Figure 3A).14

Analyse and share the major findings of the paper (Figure 3B).14

Conclude by providing the implications and the take-home messages
(Figure 3C).14 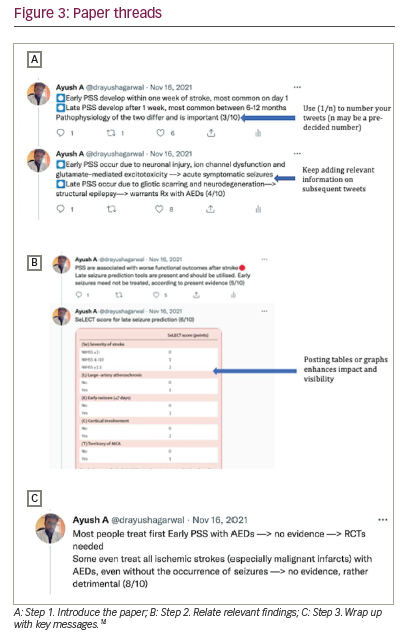 Polls are an easy and quick method for generating discussion or sharing information on a topic (Figure 4).15,16

Step 2: Design your quiz and enter the choices

Several choices may be entered. The poll length, that is, the time for which the poll remains open to readers, may be selected. The default option is of 24 hours.

Followers will respond by selecting choices and retweeting the poll (Figure 4B).16 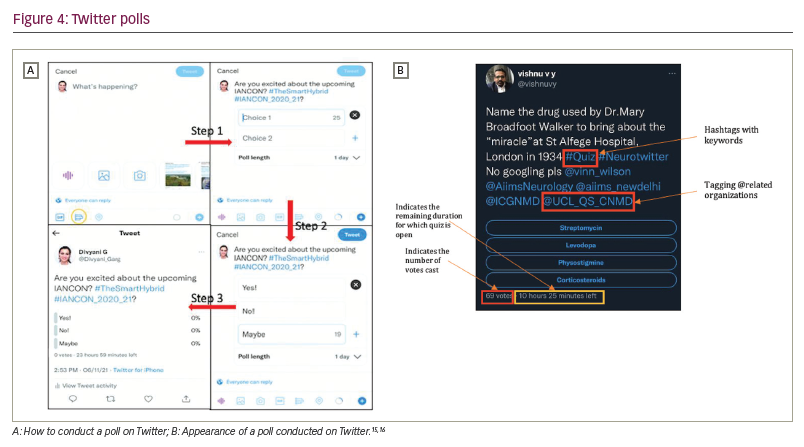 Twitter can be used to conduct live journal clubs (Figure 5).17 In that case, users select a paper and discuss the study background, methodology, results and discussion, including a critical appraisal. 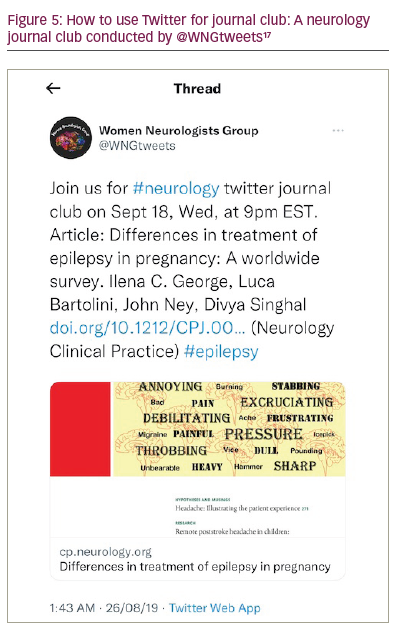 Twitter chats can be conducted to help connect the person directly with their audience through live questions and answers.

A convenient timeslot should be chosen based on the audience of interest.

Step 4: Answer promptly and stick to the allotted time

Neurologists should take certain precautions when using Twitter. It is important not to share personal patient information. It should also be remembered that these tweets are in the public domain and may be read by anyone; therefore, Twitter must be used responsibly. Moreover, healthcare workers will always represent the institution they belong to, even if popular disclaimers such as “tweets are my own” are made.

It is increasingly clear that these social media platforms are here to stay, and we must learn to harness their potential in a meaningful way. Twitter has become a platform that can nurture professional growth through networking and academic showcasing, thus promoting global collaborations. It is thus important for neurologists to embrace the growing #NeuroTwitter community.

Divyani Garg, Ayush Agarwal and Venugopalan Y Vishnu have no financial or non-financial relationships or activities to declare in relation to this article.

This study involves a review of the literature and did not involve any studies with human or animal subjects performed by any of the authors.

The named authors meet the International Committee of Medical Journal Editors (ICMJE) criteria for authorship of this manuscript, take responsibility for the integrity of the work as a whole and have given final approval for the version to be published. 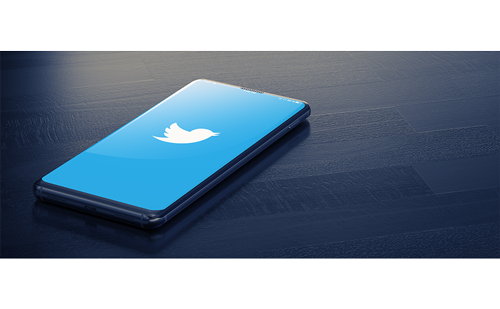 A Bird in the Hand: A Neurologist’s Guide to Efficient Tweeting in the Age of Social Media

touchREVIEWS in Neurology 2022;18(2):Online ahead of publication

The surge in social media use seems to have become a sign of our times. Social media has ramified into not only our personal lives but, importantly, also our professional lives and will continue to do so in the future.1–4 At the same time, more neurologists resorted to online learning modalities, including podcasts and social media […]

A Bird in the Hand: A Neurologist’s Guide to Efficient Tweeting in the Age of Social Media