Olfactory loss is one of the major non-motor symptoms of Parkinson’s disease (PD). Olfactory assessment constitutes an important part of PD diagnostic procedures in many clinics. The majority of patients present with severe quantitative olfactory loss, with accompanying qualitative smell disorders being very rare. Olfactory subfunctions are differentially impaired in PD compared with other hyposmic individuals whereby the impairment in odour discrimination turned out to have predictive value in preclinical PD. In terms of PD risk stratification in patients with unexplained smell loss, a clear diagnostic allocation based on an exhaustive clinical assessment and comprehensive chemosensory testing seems to be essential. This brief review summarises relevant information about olfactory dysfunction in PD and discusses the diagnostic utility of olfactory testing for early PD diagnosis.

Olfactory loss has been extensively studied in Parkinson’s disease (PD) and is now widely acknowledged as one of the major non-motor symptoms of the disease, which precedes the occurrence of clinical motor symptoms.1,2 It is found in around 90% of patients with PD,3–5 and has been considered as a supportive criterion in clinical PD diagnosis according to the International Parkinson’s Disease and Movement Disorder Society diagnostic criteria.6 In this article, we briefly review alterations in the olfactory system and then highlight clinical criteria of smell loss in PD. The focus is on how a reliable PD risk stratification could be achieved based on olfactory symptoms.

However, in regions related to both primary (piriform cortex, amygdala) and secondary integrative (orbitofrontal cortex) olfactory processing, a significant atrophy was found in PD, which correlated with olfactory performance.29–31 This might suggest that central olfactory areas in PD seem to represent the degree of disease progression, whereas this correlation is not seen in peripheral olfactory structures. In line with this, previous results based on a large 64-channel olfactory event-related potential study indicate major alterations in central olfactory processing in PD compared with people with hyposmia of different origin.32

Virtually all studies performed since the 1970s have shown olfactory disturbances in patients with PD. Published data on the prevalence of olfactory dysfunction in PD range from 45% in early studies,33 up to 74% in the work of Hawkes et al.,4 or as high as over 90%;3,5 the latter of which is currently considered to be a realistic percentage. The majority of patients with PD with smell loss (>80%) are already functionally anosmic or severely hyposmic at the time of testing, regardless of the type of olfactory test being used for diagnosis. In contrast to other causes of smell loss, only very few patients present with accompanying parosmia, or phantosmia.5 Olfactory impairment seems to be associated with PD subtype and gender, resulting in a less pronounced smell loss in patients with tremor-dominant type34,35 and in women.36,37 The majority of studies based on psychophysical testing methods failed to show a disease duration-related progression of olfactory loss,4,5,38,39 whereas some authors reported an association between disease severity and smell loss.39–41 The latter was confirmed by an imaging study using dopamine transporter single-photon emission computed tomography (DaT-SPECT), indicating that a more pronounced olfactory dysfunction was associated with greater loss of nigrostriatal dopamine neurons.42 Additionally, non-motor symptoms, like cognitive impairment, depression, anxiety and sleep disturbances, which are typically related to PD severity, are associated with the degree of olfactory loss.39,42 This allows us to consider olfactory function a marker of disease progression.

Olfactory loss in PD has a general character: all three olfactory qualities (threshold, discrimination and identification) are involved. There is evidence that patients with PD perform relatively well in odour threshold testing, but poorly in odour identification and discrimination compared with other aetiology groups of hyposmia.43 Although only a comprehensive approach allows a precise evaluation of olfactory function, short identification tests might be considered a sufficient screening measurement with good discriminating abilities.44,45 Earlier studies have reported selective olfactory deficits and described certain odours to have discriminative value for PD, e.g., pizza or banana.46–48 Other studies argue strongly against selective anosmia or hyposmia in PD, suggesting that the odour identification problem is a general one.45,49

Until now, there were no convincing data indicating that dopaminergic treatment would improve olfactory function;50–52 although deep brain stimulation might affect odour discrimination abilities.53,54 However, in a study in more than 200 patients with PD, positive effects of rasagiline treatment on odour discrimination abilities were found in patients with early PD only.55 Among non-pharmacological treatments, there is convincing evidence that structured training with odours significantly increases olfactory function in PD,56,57 suggesting that olfactory training might be a promising approach already known from current otorhinolaryngology recommendations.58

The association of Parkinson’s disease and idiopathic smell loss

Several population-based studies have already pointed out the association between unexplained smell loss and later development of PD.59–62 In terms of PD risk stratification, a clearly diagnosed idiopathic smell loss based on an exhaustive clinical assessment according to the current diagnostic otorhinolaryngological criteria seems to be absolutely essential. Data from a large patient cohort study from a Smell & Taste Clinic suggest a 10% rate of PD development among patients with diagnosed idiopathic olfactory loss, with a further increase in risk to 28.9% in those with a combined olfactory and gustatory loss.63 Thus, current findings imply the need for both olfactory and gustatory testing in a PD at-risk population. A further clinically relevant observation might be that smell loss is characterised by further deterioration prior to PD diagnosis resulting in a 2.5-fold higher PD risk in those patients, compared with other individuals with idiopathic hyposmia.63

The duration of the hyposmic phase prior to PD diagnosis is still a matter of debate.64 In many previous studies investigating the prospective risk for PD in relation to baseline, follow-up periods ranged from 2–8 years.59–62 It has been demonstrated that olfactory dysfunction frequently precedes PD motor symptoms by more than 10 years;63 other studies have postulated that this period may last decades.65 A family history of PD in first- or second-degree relatives is known to be a serious risk factor. This is reflected by 33% development of PD in this patient group,63 and notably more in studies by Ponsen et al.59,60 and Berg et al.62 In contrast to quantitative smell loss, no association between qualitative smell disorders, such as parosmia or phantosmia, and future PD has been found (Table 1).63,66 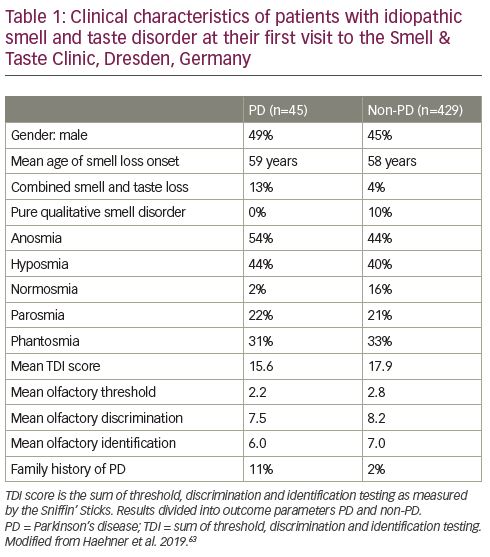 From a practical view, it must be said, that the diagnostic utility of isolated olfactory testing for early diagnosis of PD has remained modest, considering the frequency of smell loss in the general population. However, if we look from a different perspective, the exclusion of the possibility of developing PD in a patient with unexplained olfactory loss appears statistically convincing. A data-driven approach, based on supervised machine-learning, identified certain parameters among patients with unexplained olfactory loss in order to detect future PD.67 These parameters comprised the three olfactory subtest results, in order of importance: odour discrimination, odour identification performance and olfactory threshold; in addition to whether the patient was aged >46 years when olfactory loss started and a family history of PD. Using these parameters, a negative predictive value of 94.1% for later PD development was found, which outperforms positive predictions in all available studies and strongly supports the utility of olfactory subtests (Figure 1).67

Olfactory loss in PD, including the observation that olfactory loss is an early clinical sign of the disease, has been acknowledged for many years. Current study results indicate a correlation between olfactory dysfunction and progression of PD as measured by motor and other non-motor symptoms, and suggest a very early onset of olfactory symptoms, in some patients even more than 10 years before the diagnosis. Despite an unquestionable involvement of olfactory symptoms in preclinical PD, the diagnostic utility of solitary olfactory testing only for early diagnosis has remained modest because of the high frequency of smell loss in the general population. This emphasizes the need for an exhaustive clinical assessment to ensure a correct diagnostic allocation of smell loss.

Since 2018 Thomas Hummel has conducted research together with, and received funding from, Sony, Stuttgart, Germany; Smell and Taste Lab, Geneva, Switzerland; Takasago, Paris, France and aspUraclip, Berlin, Germany. Antje Haehner and Heinz Reichmann have no financial or non-financial relationships or activities to declare in relation to this article.