Background: Headache patients frequently complain about difficulties in attention and concentration, even when they are headache free, and psychometric studies concerning attentional deficits in migraine patients between attacks are scarce. Objective: To evaluate selective attention of migraine patients interictally and compare them with healthy volunteers. Patients and Methods: We performed, between February 2011 and July 2011, a case-control study including 45 university students suffering from migraine matched with 45 healthy students as controls. Migraine patients were evaluated in an interictal state. Subjects with another headache type, history of brain injury, epilepsy and visual disturbances were excluded. Mood disorders were assessed using the Hospital Anxiety and Depression (HAD) questionnaire. Selective attention was evaluated using the Delis–Kaplan Executive Functions System (D-KEFS) colour-word interference test. Results: Mean age of patients was 23.29±2.55 years, versus 22.89±2.04 years for controls (p=0.2). The selective attention score was −4.04±7.08 for patients, versus −1.31±7.73 for controls (p=0.02). The mean mental flexibility score was lower in migraine patients compared with controls (36.67±6.79 versus 41.33±6.23; p=0.01). Gender, anxiety, depression scores and migraine characteristics had no correlation with the selective attention score. Conclusion: Selective attention and mental flexibility capacities are significantly reduced in migraine patients during the interictal period. These abnormalities probably contribute to frequent attentional complaints among these patients.

Selective attention is defined as the preferential allocation of cognitive and neural resources to a specific event that has become behaviourally relevant.1 Attention is a prerequisite to all cognitive tasks and learning. It involves many brain structures grouped into the so-called attentional matrix. Migraine is frequent and occurs in as high as a quarter of the population of western countries.2 In Africa, the prevalence of migraine is 3.3 % in Benin3 and 4.3 % in Tanzania.4 Pain greatly consumes attentional resources5 and in chronic or recurrent forms can be associated with cognitive disorders especially in attention and memory domains.6,7 Since the last decade, rapid progress in cognitive neurosciences and functional neuroimaging have resulted in increased interest in cognitive dysfunction in pain states. Cognitive and attentional complaints are frequent in pain-free periods in recurrent-pain patients.8 In migrainous patients, while attentional impairment is well accepted during the headache episode, results in the published literature concerning interictal cognitive dysfunction are still equivocal,9–12 and it is not clear whether psychological factors mediate cognitive dysfunction.13 Migrainous patients report more depressive symptoms;13 therefore, it could be that not pain itself but the experience of depressive symptoms have a negative effect on cognitive functioning. If an attentional deficit really exists between headache episodes, it might contribute to a decreased quality of life and even socio-professional performance. For instance, in a longitudinal study from New Zealand, subjects were followed up with psychometric tests from the age of 3 till the age of 26 years. Subjects diagnosed to suffer from migraine at age 26 were subtly but significantly impaired in tests of verbal ability and had lower academic achievements.14

Thus, the aim of this study was to determine whether migraine patients in an interictal state show impaired, selective attentional performances compared with controls and to identify contributing factors.

Subjects and Methods
Subjects
This was a case-control study carried out between February 2011 and July 2011 at the Dakar University Medical Center (COUD). We included students suffering from migraine according to the International Classification of Headache Disorders-II (ICHD-II) criteria15 who had consulted at COUD since January 2011. Patients were randomly selected from the COUD database, contacted by phone and asked to consult again in a pain-free period, at least 48 hours after the end of the previous attack. Patients were called again by phone 48 hours after participating in the study to ask if they had suffered an attack in this time interval. We were then able to identify retrospectively 45 migraineurs in interictal and six in preictal periods. Controls were 45 gender- and agematched healthy students, consulting for systematic medical screening at COUD. Participants with another headache type, history of head injury, epilepsy, visual disturbances and preventive migraine use within the last 6 months before the study were excluded as well as controls with a history of headache or migraine inheritance. The six patients in the preictal period were excluded for further data analysis.

Methods
Instruments
Different tools were used during the study.

Delis–Kaplan Executive Functions System Colour-word Interference Test
Selective attention is measured in tasks that involve the control of competing responses. The Stroop task provides a clear illustration of the basic capacity to focus on relevant cues concomitantly and the ability to ignore irrelevant (even conflicting) material. Given that our study sample was composed of subjects with a high level of formal education, we used a modified and more sensitive version of the Stroop task, with an additional sub-task known as Delis–Kaplan Executive Functions System (D-KEFS) colour-word interference test. This version is composed of four sub-tasks of increasing difficulty, each consisting of 50 items presented in random order on a sheet of paper in five lines of 10 items. The four sub-tasks are as follows:

Protocol and Measures
Participants were asked to consult between 09.00 and 11.00 am after a normal night’s sleep. Data collection was carried out in a calm and relaxed atmosphere in a quiet room, well illuminated with a temperature of around 25°C. Socio-demographic data were obtained for all subjects. Patients were asked questions on the characteristics of their headaches. They then underwent a general and neurological examination. The HAD questionnaire was filled in by all subjects, and the anxiety and depression scores were obtained for every subject.

The D-KEFS colour-word interference test was then blindly administered by one of us (YF). All subjects were informed that they were going to perform an attentional test and no details about our assumptions were provided before the test. At each sub-task, the subjects were asked to name as quickly and accurately as possible. Each sub-task was preceded by a practice trial of 10 stimuli in order to familiarise the subject with the procedure and in order to ensure that instructions had been well understood. The duration to perform each sub-task was 45 seconds, measured with a chronometer. Outcome measures from the attentional task were number of words named and number of errors (incorrect colour naming or reading) for each of the four sub-tasks.

Statistical Analysis
Data were encoded in the CSpro 3.0 software and analysed using Statistical Package for the Social Sciences (SPSS) 16.0 software. Interference and 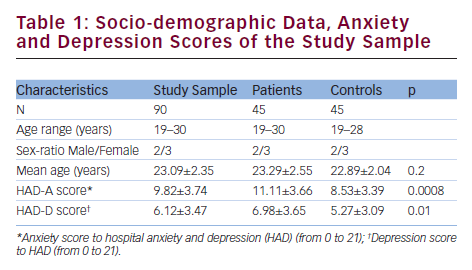 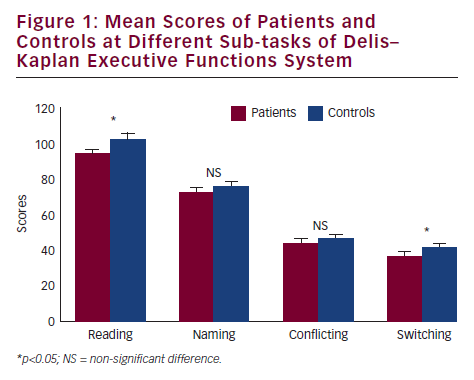 D-KEFS sub-tasks scores of participants were separately compared with the non-parametric Kruskal–Wallis test. Continuous variables were compared using analysis of variance (ANOVA) test. A p value <0.05 was set as significance threshold. The correlation between clinical, affective and cognitive variables was analysed using the Spearman test.

Headache Features
Migraine subtypes were migraine without aura in 39 (87 %) patients and migraine with visual aura in six (13 %) patients. The mean number of headache days per month in patients was 10.58±5.44 days. The mean delay from the end of the last migraine attack to consultation was 4.29±2.57 days.

Anxiety and Depression
Anxiety and depression symptoms were more frequent in patients than controls (p=0.0008 and p=0.01, respectively) (see Table 1). 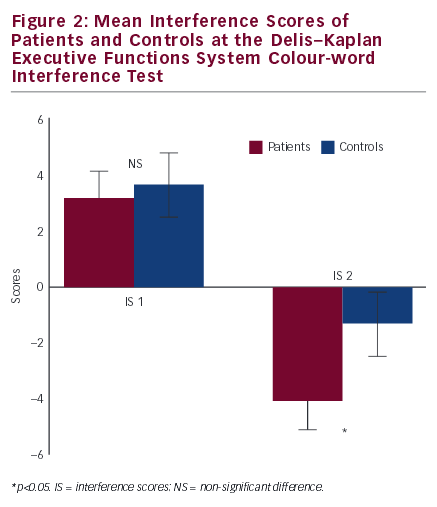 Discussion
The prevalence of migraine in many countries is high,19 and cognitive complaints from migraine patients are frequent.8 Despite the increasing number of studies concerning cognitive function in migraine, available results do not allow to draw a definite conclusion of migraine impact on cognitive functioning during the interictal period.11–13,17,20 Discrepancies between available studies might be attributed at least partially to methodological factors. Variability of neuropsychological tests used, clear identification of patients in the interictal period and small sample sizes represent the main issues limiting data interpretation. We show here that selective attention and mental flexibility of migraine patients are impaired in the interictal period. In other words, the abilities of these patients to focus on a specific task and to switch from one task to another are altered compared with their healthy counterparts in the interictal period. We will now discuss in more details the results of the various tests we used.

The D-KEFS colour-word interference test sub-tasks are of increasing difficulties. Mean scores of migraine patients at any sub-task of the D-KEFS colour-word interference test were inferior to those of controls, showing a reduced speed in completing different sub-tasks. The significantly low performances of patients at sub-task 1 (reading) can be attributed to a prolonged reaction time in the initiation of cognitive and motor processes.11 At sub-task 4 (switching), which requires more attentional resources, the capacity of patients to switch from one task to another was altered compared with that of controls. Grisart and colleagues in a study using the same version of Stroop test found no difference in scores for sub-task 4 between chronic pain patients with mild pain intensity and controls.6 However, the latter study included mainly chronic low back pain patients without headaches. Migraine patients might thus be more prone to difficulties in mental flexibility. The prefrontal dorsolateral cortex is particularly involved in tasks requiring mental flexibility. In familial hemiplegic migraine, abnormalities of calcium channels that have been implicated are also involved in the transmission of synaptic information in cognitive neural networks.11

Surprisingly, interference scores were not correlated to migraine frequency. Migraine characteristics seem to have no effect on interference scores,3,5,21 except that in one study migraine with aura was associated with lower attentional performances.20

A weakness in our study is the relatively small sample size of subjects. We believe, nonetheless, that our results are reliable because of the matched control group and the use of a more sensitive tool to detect selective attention deficits. From a clinical and practical point of view, it is important to realise that the experience of recurrent migraine attacks may influence selective attention and mental flexibility interictally. Our understanding of the effects of migraine on cognitive functioning has important implications for appreciating the range of problems reported by patients by providing further insights into the pathophysiology of this disorder. There still remains the need for a larger study, including more patients, to confirm our findings.

Fogang Fogoum Yannick, Kamgang Fogoum Alain, Ndiaye Moustapha, Diop Amadou Gallo and Ndiaye Mouhamadou Mansour have nothing to disclose in relation to
this article. No funding was received for the publication of this article.

This article is published under the Creative Commons Attribution Noncommercial License, which permits any non-commercial use, distribution, adaptation and
reproduction provided the original author(s) and source are given appropriate credit.

We thank all the patients and healthcare professionals involved. This research received no specific grant from any funding agency in the public,
commercial or non-profit sectors.