Multiple sclerosis (MS) is a disease that invariably affects ambulation and mobility in the majority of patients. The ability to move may be affected by many impairments, including weakness, imbalance, fatigue, and spasticity. Standard physical therapy and other rehabilitative techniques may improve function in these areas to some extent, but are not always successful. A newer therapeutic approach to the treatment of these impairments is exercise.

Until recently, there was concern that persons with MS may not be able to tolerate aerobic exercise regimens, primarily because of their susceptibility to heat-related worsening of symptoms and neurological impairment. There are now evidence-based data that not only can persons with MS tolerate standard aerobic exercise, but also that they can benefit from it.1 Most studies of the benefits of rehabilitation in persons with MS have focused primarily on functional outcomes. In contrast, the studies of exercise in the MS population have addressed more specific questions. These include the effects of exercise in ameliorating specific deficits such as muscle weakness, fatigue, improvement in fitness parameters, mood, and quality of life. Studies indicate that persons with MS can show improvement in all of these areas using a variety of training and exercise protocols.2–6

In 1996, the seminal study of Petajan et al. conducted a randomized controlled trial of aerobic exercise in patients with moderately severe MS. The treatment group participated in 15 weeks of supervised aerobic training. Compared with the non-treated control group, they exhibited significant improvements in muscle strength, aerobic capacity, serum lipid profile, bladder and bowel function, and quality of life. Expanded disability status scale (EDSS) scores were unchanged.7 Studies that have examined the effects of exercise and resistance training on improving muscle strength in persons with MS include the study of Kraft et al., who used a progressive resistance-training regimen and demonstrated improved muscle strength in the upper and lower extremities.8 White and colleagues reported that an eight-week progressive lower limb resistance-training protocol improved leg strength and stepping ability.9 De Bolt et al. used lower body resistance training in a home-based design and found that leg extensor power increased, but there was no change in balance or overall mobility.10 Rodgers et al. reported that their six-month aerobic-training regimen had little effect on gait parameters in patients with MS.11

However, more recently Romberg et al. examined the effects of a sixmonth exercise training program in persons with mild to moderate MS, and found significant improvements in muscle strength and walking speed compared with a control group.12 Rampello and colleagues demonstrated that aerobic training on an exer-cycle for three sessions per week for eight weeks improved walking distance and speed, as well as fitness parameters, in patients with mild to moderate MS.13 In MS patients with moderate disability, functional improvement as measured on the Guy’s Neurological Disability Scale (GNDS) was demonstrated after a 12-week aerobic exercise program by Kileff and Ashburn.14 Importantly, none of these studies found any adverse effects of any of the training regimens, i.e. there were no increases in symptoms of deterioration in the usual level of function. A four-week study of aerobic training in persons with MS by Mostert et al. showed benefit in fitness and fatigue parameters, with only a 6% incidence of symptom exacerbation.15

While the mechanisms of exercise-induced improvement in MS remain to be elucidated, there are some data that suggest they may influence cellular and immune parameters. Exercise has been shown to increase the levels of brain-derived neurotrophic factor (BDNF) and other growth factors in normal adult rats.16 In the animal model of MS—experimental allergic encephalomyelitis (EAE)—regular exercise was shown to delay onset and duration in rats compared with non-exercised controls.17 In persons with MS who participated in a standard aerobic exercise protocol, levels of BDNF were increased post-exercise.18 These reports may have implications for exercise as a possible therapeutic or neuroprotective strategy for the underlying pathophysiology of MS itself, in addition to being a rehabilitative modality.

A large part of current rehabilitative strategies is to apply compensatory mechanisms to improve function. Ideally, more effective therapies could address and alter underlying impairment as well. Such therapies would exploit and/or enhance the nervous system’s capacity for plasticity and repair. One such approach is locomotor training (LT) using bodyweight support on a treadmill.

LT on a treadmill with a bodyweight support system (BWST) is a new rehabilitative approach that is based on principles that promote the movement of the limbs and trunk to generate sensory information consistent with locomotion to improve the potential for the recovery of walking after neurological injury.19–23 During step training the individual is suspended in a harness by an overhead support system over a treadmill. BWSTs provide an environment in which one can facilitate balance control and manually or robotically assist trunk and leg movements during weightbearing stepping and standing. LT principles are followed to maximize task-specific sensory stimulation that matches the kinetic and kinematic properties associated with the phases of stepping.

…functional outcomes improve when a
specific task, rather than a non-specific
intervention, is repeatedly practiced.

An important emerging concept in re-training neurologically impaired individuals to walk is the concept of task specificity. Rehabilitation paradigms in both animal and human studies indicate that functional outcomes improve when a specific task, rather than a non-specific intervention, is repeatedly practiced. An early study of patients with stroke demonstrated better functional gains in ambulation when task-specific therapy was started early after injury compared with traditional non-specific therapy interventions.24 This may explain why many of the studies of standard, non-task-specific rehabilitative or exercise modalities in MS patients may produce improvements in parameters such as muscle strength or fatigue without producing functional gains in ambulation or change in EDSS.

Individuals after severe spinal cord injury (SCI) can generate standing and stepping patterns when provided with a BWST and manual assistance.25 During both stand and step training of human subjects with SCI, the subjects are placed on a treadmill in an upright position and suspended by an overhead pulley in a harness at the maximum load at which knee buckling and trunk collapse can be avoided. Trainers positioned behind the subject and at each leg assist as needed in maintaining proper limb kinematics and kinetics appropriate for each specific task; alternatively, a driven gait orthosis may be used. During stepping, legs are loaded in an alternating pattern, and extensor and flexor activation patterns within each limb are also alternated as the legs move from stance through swing. Afferent input related to loading and stepping rate can influence these patterns, and training has been shown to improve these patterns and function in clinically incomplete SCI subjects, as discussed below.

One of the first reports, by Visintin and Barbeau, in 1989 reported the generation of gait-appropriate electromyography (EMG) patterns in a small number of SCI subjects at 40% BWST.26 Subsequently, Wernig and Muller reported on the effects of LT in eight incomplete SCI patients who were not functional ambulators. These subjects were able to walk overground after training and also produced phasic EMG patterns in the lower extremities, despite lack of voluntary muscle activity in one or both legs.27 A larger controlled study by these investigators examined the effects of LT in 44 subjects with chronic incomplete myelopathies, including some subjects who probably had MS, compared with a historical control population of 12 subjects who received conventional therapy. At the end of the LT training, of 33 SCI subjects who were wheelchair-bound at the beginning of training 25 were independent ambulators and seven could ambulate with assistance. The remaining 11 patients who could ambulate prior to training showed improved speed and endurance. The 12 control subjects remained wheelchair-bound after conventional therapy, but when switched to LT nine became independent ambulators.28 Barbeau and colleagues reported improved overground walking speed (OGWS) and endurance in nine subjects with chronic incomplete SCI, with normalization of gait patterns clinically and on EMG after LT.29 Dobkin et al. reported generation of gait-appropriate rhythmic EMG patterns after LT in a group of complete SCI patients.30

In summary, LT/BWST has been shown to produce improvement in ability to ambulate in patients with incomplete SCI who were not functional ambulators prior to training. In addition to improvement in OGWS, benefit could be seen in gait quality and fitness parameters.

All subjects tolerated the training well
without incurring fatigue or interference
with their usual activities of daily living.

Why Apply Locomotor Training to a
Multiple Sclerosis Population?

Patients with primarily spinal forms of MS clinically resemble individuals who have suffered an incomplete SCI in that both groups exhibit weaknesses in the extremities, spasticity, hyper-reflexia, and loss of sensation, all of which can interfere with effective mobility. Therefore, it is reasonable to consider the application of therapeutic modalities that have been shown to benefit SCI patients in terms of improving impairment and disability with respect to mobility to a selected MS population. The studies cited demonstrate the potential benefits of LT in the SCI population, but randomized clinical trials are needed.

Persons with MS can have improvement in fitness and psychosocial parameters from both exercise and standard physical therapy without always improving their ability to ambulate. LT has been shown to improve ambulation in SCI patients. It is a unique approach that combines elements of aerobic exercise with principles of standard physical therapy, i.e. neurofacilitory techniques and task-specific training. These attributes would suggest that LT can benefit persons who have impaired ambulatory capacity due to MS. Pilot data from our group support this assumption.33

Four patients with MS and severe functional limitations in ambulation (EDSS 7–7.5) received an average of 40 sessions of LT using manual LT facilitation. At the end of training, all subjects showed improvement in muscle strength, and three out of four subjects improved balance, spasticity, endurance, and quality of life. All subjects tolerated the training well without incurring fatigue or interference with their usual activities of daily living. A larger trial funded by the National MS Society using a robot to provide the LT, with a control resistant exercise group, is in progress.

In addition to improvements at a functional level, exercise may have benefit at a tissue level as well, and may promote cortical plasticity. At least one study has reported that task-specific training in persons with MS results in different activation patterns before and after training compared with controls, indicating the utility of functional magnetic resonance imaging (fMRI) in assessing cortical changes induced by rehabilitative intervention.34 In summary, over the past decade a body of evidence has been accumulated that persons with MS at various stages of disability can tolerate and benefit from exercise training, as demonstrated by improvements at functional, neurological, tissue, and molecular levels. Fundamental questions remain to be answered in terms of the optimal combination of exercise, intensity, duration, and specificity, although obviously each patient will need an individualized exercise prescription. Further research is needed to answer these questions. 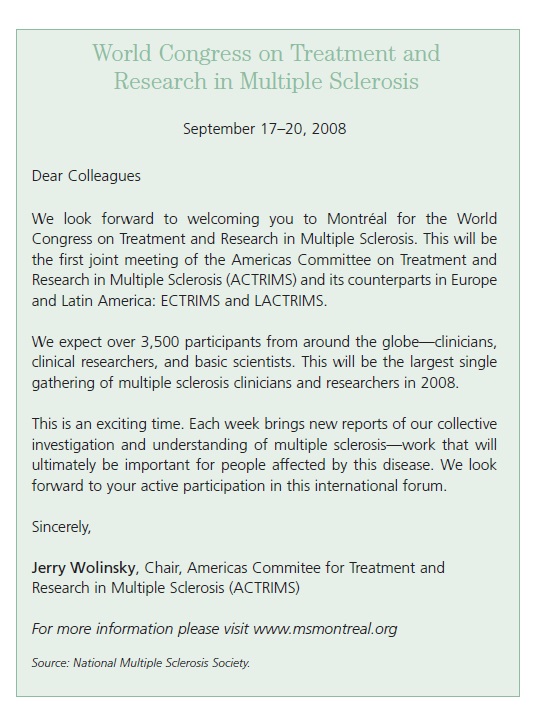 Multiple sclerosis (MS) is a chronic neuro-inflammatory condition estimated to affect over two million people worldwide. Several subtypes of MS have been described, and they are defined by their clinical phenotypes.1 The majority of patients initially exhibit relapsing remitting MS (RRMS), which is characterized by acute episodes of overt inflammation associated with abrupt clinical decline, most […]

Multiple sclerosis (MS) has traditionally been considered a primarily T-cell-mediated autoimmune disease of the central nervous system (CNS); this is based on data from animal models,1 the presence of activated T lymphocytes in MS plaques that outnumber B cells and T-cell subset alterations in blood,2 the association of MS with certain human leukocyte antigen (HLA) and a […]

Multiple sclerosis (MS) is an inflammatory disease of the central nervous system affecting almost 3 million individuals worldwide.1–3 The precise pathogenesis of the disease is unknown, though migration of peripheral T and B lymphocytes into the central nervous system is considered to be one of the major pathophysiologic mechanisms.4–6 Sphingosine-1-phosphate (S1P) modulators, through induction of […]