Disappointed by the limitations of pharmacotherapy, emboldened by technological advances in surgery and radiology, and armed with a better understanding of pathophysiology, physicians and scientists in the 1980s charted a renaissance of surgery for movement disorders such as Parkinson’s disease (PD). The desire for a safer alternative to lesional or ablative neurosurgery, coupled with observations that intraoperative electrical stimulation used for target identification could alleviate abnormal movements,1,2 prompted the exploration of fully implantable deep brain stimulation (DBS) systems in movement disorders in the late 1980s.3 Use of similar systems was applied to investigations in epilepsy, psychiatry, and a variety of other neurological conditions in the late 1990s and early 2000s, probably for similar reasons to those that spurred DBS for movement disorders. In addition, experience with DBS in movement disorders, observations about the cognitive and behavioral effects associated with DBS, and the availability of animal models catalyzed the extension of DBS to new indications.4–7 This article focuses on summarizing the neurobehavioral outcomes of DBS in PD.

By far the most attention to neurobehavioral outcomes of DBS has been devoted to PD, and the majority of these studies have examined the outcome of subthalamic (STN) rather than thalamic or pallidal (GPi) DBS. Probably greater controversy attends the neurobehavioral outcomes after STN DBS than after GPi or thalamic DBS, and this probably reflects, at least in part, differences among studies in the sample characteristics, selection and exclusion criteria, length of follow-up, surgical technique, post-operative DBS programming and pharmacotherapy protocols, and the thoroughness and timing of the neuropsychological evaluation protocol. In general, studies employing cognitive screening instruments fail to detect neurobehavioral morbidity. While some may argue that the lack of change on screening instruments suggests that neuropsychological changes detected by more extensive evaluations are not of clinical significance, a recent meta-analysis of the empirical data suggests that screening instruments may be insensitive even to clinically meaningful changes after DBS.8 Consequently, cognitive screening measures are probably useful in helping to decide which surgical candidates can be excluded from further evaluation (including full neuropsychological evaluation), but insufficient to adequately document neurobehavioral outcomes of DBS.

Four studies9–12 have observed no widespread or significant changes in cognition, mood, or behavior after unilateral thalamic DBS, although one study suggested that statistically (but not necessarily clinically) significant declines in verbal memory are associated with left thalamic DBS. Few studies have examined mood after thalamic DBS, but one study9 found an improvement in depressive symptoms four to 10 days after surgery.

Unilateral GPi DBS appears cognitively safe, although this conclusion is tempered by the limited number of small-sample studies published.13–15 Although patients in one study showed statistically significant declines in visuoconstructional ability and verbal fluency, the changes were rarely of clinical significance. Even when using a liberal criterion of impairment (a test score falling one standard deviation below the mean of normative samples), another study13 observed that only six of the 20 patients showed any increase, no matter how small, in the percentage of tests in the impaired range. These patients tended to be older and were taking higher medication dosages prior to surgery. The safety of bilateral GPi DBS has been addressed in a handful of studies, and most found that the procedure is relatively safe from a cognitive standpoint.16–18 Nonetheless, a small minority of patients may develop cognitive morbidity. One case with magnetic resonance imaging (MRI)-confirmed electrode location had significant executive dysfunction ensuing from bilateral GPi DBS; importantly, when the stimulators were turned off, the impairment was partially reversed, thereby suggesting a direct role of stimulation in the neuropsychological deficit.19 Relatively isolated cognitive impairments were reported by the Toronto group in four patients.20
Generally, studies using self-report measures of mood state have not observed improvements in depressive symptomatology, but two studies21,22 observed improvements in anxiety symptoms after GPi DBS. The clinical significance of these mean changes on symptom inventories is unclear. A case study reported hypomania and manic episodes after unilateral or bilateral GPi DBS,23 but this morbidity may relate to an interaction between stimulation and medication. Similarly, it is unclear whether hypersexuality reported in isolated cases24,25 reflects a possible dopamine dysregulation syndrome, medication–stimulation interactions, or a phenomenon that is part of hypomania.

To determine whether second surgery (i.e. a staged bilateral procedure) carries cognitive risks relative to the first surgery, Fields et al.21 examined neuropsychological functioning in six patients before surgery, two months after the first GPi DBS operation, and again three months after the second operation. No patient experienced significant declines in cognition and delayed recall was improved relative to baseline following the second operation.
Rothlind and co-workers57 recently reported on a randomized comparison of staged, bilateral GPi, and STN DBS in 42 patients and also found that minimal cognitive changes ensued from the second relative to the first operation. Semantic verbal fluency (the ability to quickly name items belonging to a category such as fruits) declined after left DBS regardless of whether the left side was operated on first or second. Although phonemic verbal fluency also declined after left DBS only, a significant effect of the second surgery was not demonstrated.
It is unclear whether GPi DBS is safer than alternative procedures such as pallidotomy or STN DBS. Studies by Merello et al.15 and Fields et al.81 found the cognitive safety of GPi DBS and pallidotomy to be comparable. Although some suggest that bilateral GPi DBS may entail less cognitive morbidity than bilateral STN DBS,27,74,82 the only randomized comparison of the cognitive effects of GPi and STN DBS has failed to reveal substantial differences between the two treatments.57 A larger randomized trial comparing the effects (including the neurobehavioral consequences) of simultaneous bilateral GPi with STN surgery is nearing completion.83

Few studies have attended to social adaptation after surgery, a complex matter that has been more adequately addressed in the epilepsy surgery literature. Recent studies consistently provide evidence that gains in motor function and quality of life (QOL) do not necessarily translate into improved social integration and adaptation.84,85 Familial relationships can be compromised after DBS,85,86 especially when expectations of outcomes and perceived levels of functioning diverge between patient and care partner. In addition, despite improvements in motor function and QOL, patients may not return to work. In one study, only nine of 16 with work before surgery had returned to work 18–24 months after surgery.85 Predictors of, and barriers to, social adjustment remain to be identified.

A review of the literature and meta-analyses indicates DBS for movement disorders to be quite safe from a neurobehavioral standpoint (while improving motor symptoms and both the patient’s and care partner’s QOL). However, it is also clear that a small proportion of patients have moderate or severe neurobehavioral morbidity. If one combines the various cognitive and psychiatric morbidities reported across studies, it is reasonable to estimate that about 10% of patients with PD undergoing DBS will experience one or more transient or permanent neurobehavioral adverse events. Deserving detailed empirical investigation is the observation in a few small uncontrolled studies that improvements in motor symptoms and QOL may not necessarily translate into social (re)adjustment. Research will need to identify the patient, medico-surgical, and psychosocial factors that are associated with neurobehavioral morbidity and preclude some patients from demonstrating gains in occupational, interpersonal, familial, and marital functioning. ■ 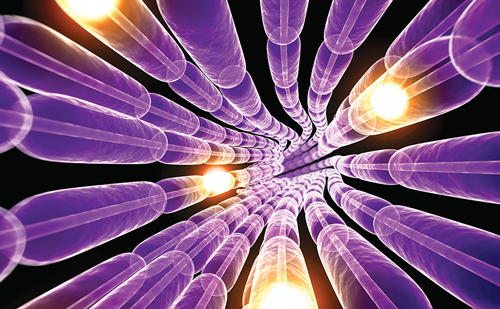 Development, Efficacy and Safety of Once-daily, Bedtime, Extended-release Amantadine (Gocovri®) to Treat Dyskinesia and OFF Time in Parkinson’s Disease

Parkinson’s disease is a progressive synucleinopathy that causes widespread neurodegeneration.1 It is estimated to affect approximately 6.1 million people globally and 0.7–1.0 million people in the USA.2–4 The incidence of the disease is expected to continue to increase over time, and with it, the burden to healthcare systems.3,4 The cardinal motor symptoms, which reflect nigral dopaminergic degeneration, are bradykinesia, […]