The modern concept of Parkinson’s disease (PD) has changed and evolved and we consider Parkinson’s to be a multi-neurotransmitter dysfunction-related disorder with central and peripheral nervous system involvement. The clinical expression is thus a mixture of the outwardly evident motor symptoms and a range of ‘hidden’ non-motor symptoms. The complex underlying neuropathology of PD calls for a reassessment of the treatment strategies currently used. Treatment of PD is guideline-driven and in most cases based on a dopamine replacement strategy or surgical manipulation of brain dopaminergic pathways. Treatment of many non-dopaminergic non-motor and some motor symptoms, which have major effects on quality of life, continue to remain a key unmet need. Like in other chronic conditions such as rheumatology, the role of personalised medicine in PD needs to be increasingly considered. Personalised medicine for PD is not just a genetic approach to treatment but encompasses various strands of treatment. These include pharmacogenetic, pharmacological, as well as socio-demographic and lifestyle-related issues. Once these ‘enablers’ of personalised medicine are considered then satisfactory treatment for our patients with Parkinson’s can be achieved in an individualised manner. Future therapy for PD should move in that direction.

Levodopa therapy and other dopamine replacement therapies (DRTs) have remained the cornerstone for the treatment of Parkinson’s disease (PD) since the 1960s.1 Many motor symptoms of PD can be partially reversed by DRT as well as more invasive therapies such as deep brain stimulation (DBS) of the subthalamic nucleus. However, many challenges remain both in the short and long term. Largely, these relate to the fact that the modern definition of PD has changed and the condition is now regarded as a complex disease with syndromic presentations manifesting as non-motor subtypes.2,3 Non-dopaminergic presentations, such as cholinergic, serotonergic and noradrenergic, can dominate the clinical phenotype of PD and form the basis of the recently described non-motor subtypes of PD.3–5 This heterogeneity of neuropathology and diversity of presentation needs treatment tailored to suit the clinical phenotypes. However, globally PD still continues to be treated by guideline-based algorithms underpinned by generic prescribing of levodopa and other DRTs. New drugs continue to be focussed on single targets when PD is known to be a multi-system, -neurotransmitter and -dysfunction-related disorder. Clearly, in future, this approach needs to change and the concept of a holistic personalised medicine strategy combining several strands of genetic, therapeutic, personal and socio-economic variables needs to be embraced.6,7

The concept of personalised medicine is particularly relevant for PD, a condition with multiple pathology and neurotransmitter-linked syndromes.2,3

For the development of new drugs relevant to the delivery of personalised medicine, robust animal models of PD are required. These models need to reflect the progressive pathology and multineurotransmitter defects that characterise PD. Such models based on toxin and/or genetic manipulation of rodents and primates remain elusive and represent an under-researched but key unmet need for the future of PD. Preliminary ‘bench’-based work has unravelled new potential targets for therapy which may help with aspects of non-motor symptoms (sleep dysfunction, cognition, pain and autonomic dysfunction) in PD, as well as some motor symptoms (gait freezing, dyskinesias). A combination of good animal model coupled with multiple non-dopaminergic target-based 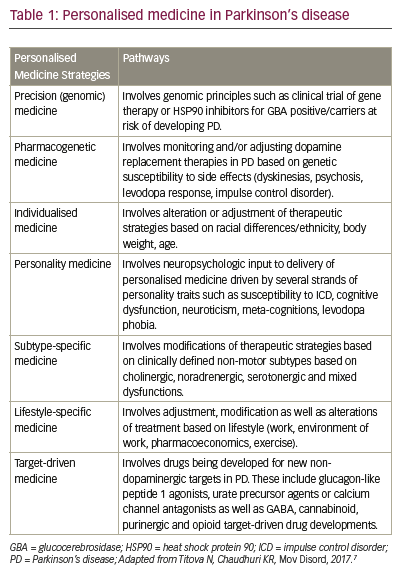 treatment strategies may be the key to addressing the complex symptoms of PD. Neuroprotection, as well as neuromodulation, is currently an unmet need in PD. Whether such a bench-to-bedside translational approach (based on multiple non-dopaminergic targets) will have a role in neuroprotection or neuromodulation in PD remains to be seen.

The genomic aspect of personalised medicine involves the ability to identify ‘at-risk’ individuals based on known genetic susceptibility markers in the pre-prodromal stage of PD. Examples are heterozygote carriers of the glucocerebrosidase (GBA, GCase) gene, underlying Gaucher’s disease. This gene is responsible for approximately 5–10% of GBA mutations in PD patients.9 GBA mutation is now regarded as the most important genetic predisposing risk factor for PD and enhancing GCase activity or alteration of activity of chaperone proteins, such as HSP90 (heat shock protein 90), may be beneficial.9 In this instance, personalised medicine will consist of a dual precision strategy of combining chaperone and GCase augmentation-based ‘cocktail’ therapy. Pharmacogenetics, on the other hand, will address inherited genetic differences in drug metabolic pathways which can influence individual clinical responses to drugs as well as adverse events.7,10 Using genetic markers, one may, in future, be able to predict the susceptibility of PD patients to side effects such as impulse control disorders or complications of levodopa therapy such as dyskinesia.

Other major factors involved in the delivery of personalised medicine include ageing and the concept of chronologic versus biologic age when increased life expectancy is taken into context. Therefore, it is possible that in the future, DBS of the subthalamic nucleus would be considered in ‘healthy aged’ PD patients even if they are older than 70 years. Currently, age remains a major limiting factor for offering DBS surgery to PD patients. Similarly, in younger patients depression and anxiety will have to be considered as such patients appear particularly susceptible to these non-motor sympotms.7 Non-motor and motor clinical subtypes of PD are an emerging and important clinical concept that will also determine treatment of PD.4–6 A cholinergic syndrome of PD would need a different treatment strategy to someone with a noradrenergic subtype of PD.2 Relevant clinical, imaging and genetic biomarkers may help define and drive these subtype-specific treatments. Other key issues are personality, lifestyle, body weight/body mass index, race and ethnicity as well as pharmacoeconomics.7 These are the ‘enablers’ of personalised medicine for future. Currently, our treatment strategies do not address these external but important variables that may determine the success of any therapy for PD. A ‘checklist’ of personalised medicine strategy supported by a strong multidisciplinary set-up should be the way forward to delivering successful treatment for PD in future. We need a combined holistic approach rather than a single target-focussed dopaminergic treatment strategy which has failed to deliver cure, neuroprotection, neuromodulation or effective treatment of non-motor symptoms of PD in the past 50 years.

Nataliya Titova, Peter Jenner and K Ray Chaudhuri have nothing to declare in relation to this article.

This article is a short opinion piece and has not been submitted to external peer reviewers.

All named authors meet the International Committee of Medical Journal Editors (ICMJE) criteria for authorship of this manuscript, take responsibility for the integrity of the work as a whole, and have given final approval to the version to be published.