Background: Posterior reversible encephalopathy syndrome (PRES) is characterized by a combination of clinical and radiological features. PRES presents with the rapid onset of neurological symptoms, such as headache, convulsion, altered consciousness and visual disturbance. If PRES is recognized and treated early, it has a good prognosis. We present a patient with PRES due to systemic lupus erythematosus (SLE) and hypertension. This report aims to provide information for the early diagnosis and prompt management of SLE-related PRES to maximize patient outcomes. Case presentation: A 24-year-old woman came to the emergency department with an acute severe headache and visual disturbance. Two years earlier, she was diagnosed with SLE and hypertension. She was fully awake with normal orientation. Her initial blood pressure was 170/100 mmHg. Her visual acuity was 1/∞ (light perception only). Brain T2-weighted magnetic resonance imaging showed multiple hyperintensity patches at the occipital lobe and cerebellum; these findings suggested a diagnosis of PRES. Due to SLE-related PRES, she was treated with intravenous methylprednisolone, and her blood pressure was monitored. Her blood pressure was maintained using a combination of oral antihypertensive drugs. She was also treated with intravenous phenytoin for seizure prophylaxis. Her symptoms resolved completely, and her visual acuity returned to normal after 2 days. She was discharged without any neurological sequelae. Conclusion: PRES is a clinical syndrome with specific imaging findings. The diagnosis of PRES requires thorough clinical and neuroimaging examinations. Identifying the underlying cause and delivering prompt treatment is important for achieving a better outcome and minimizing neurological sequelae or mortality in patients with PRES.

Posterior reversible encephalopathy syndrome (PRES) is a syndome characterized by a combination of clinical and radiological features.1–3 Its global incidence is unknown. It is underdiagnosed probably due to limited awareness. PRES presents with the rapid onset of neurological symptoms, such as headache, convulsion, altered consciousness and visual disturbance. Computed tomography (CT) and magnetic resonance imaging (MRI) findings of PRES are focal/patchy symmetrical vasogenic cerebral oedema, typically involving the posterior area of the brain.1–3 PRES has a wide array of aetiologies, such as hypertension, several autoimmune disorders, preeclampsia, immunosuppressive medication and renal failure.1–3 The pathophysiology of PRES is not yet clearly understood.4 It is hypothesized that PRES is caused by severe hypertension that causes dysregulation of cerebral vessels.5,6 Another theory suggests that it is caused by endothelial injury of cerebral vessels caused by inflammatory mediators in patients with autoimmune diseases.5,6 If PRES is recognized and treated early, it has a good prognosis. The clinical symptoms and changes seen in imaging usually resolve completely within days or weeks. However, if not treated and diagnosed properly, patients with PRES will have irreversible neurological deficits.7–9 We present a patient who had PRES associated with SLE and hypertension. This study aims to provide information for the early diagnosis and management of PRES in patients with SLE.

A 24-year-old woman presented to the emergency department with an acute severe headache and visual disturbance. Two years earlier, she had been diagnosed with systemic lupus erythematosus (SLE) and hypertension. She took azathioprine and methylprednisolone regularly for the treatment of SLE. She also took nifedipine and ramipril for hypertension.

At presentation to the emergency department, the patient had had a severe headache for 2 days, which had become unbearable and was suddenly accompanied by visual blindness. She also felt nauseous and had vomited twice that day. She reported that she often had headaches but never this severe and that this was the first time she had experienced visual blindness.

She was fully awake with normal orientation. Her initial blood pressure was 170/100 mmHg. She described that the pain intensity of her headache was 10/10 on the visual analog scale. Her visual acuity was 1/∞ (light perception only). On neurological examination, her cerebellar, motoric and sensory and other neurological functions were normal. No abnormality was found in her other cranial nerves; only her visual acuity was abnormal. Her pupillary light reflex was normal. She was treated symptomatically with intravenous paracetamol for the headache and ondansetron for nausea. She was also given amlodipine 10 mg in addition to her usual antihypertensive drugs. She was then admitted to the hospital. Our differential diagnosis at this time included neurogenic complications from SLE or space-occupying lesion compressing the optic chiasm.

Routine laboratory workup and non-contrast brain MRI examination were obtained. Brain T2-weighted fluid-attenuated inversion recovery (FLAIR) MRI showed multiple hyperintensity patches at the occipital lobe and cerebellum; these findings suggested a diagnosis of PRES (Figure 1). PRES is not regularly treated using corticosteroids, and sometimes, immunosuppressive medicine can precipitate PRES. However, we treated the patient with intravenous methylprednisolone owing to the suspicion that her PRES was related to SLE disease activity. Her blood pressure was maintained using a combination of oral antihypertensive drugs (ramipril 2.5 mg and nifedipine extended release 30 mg). On the day after drug administration, her systolic blood pressure
was around 140–150 mmHg, and her diastolic blood pressure was 90–95 mmHg. She was also treated with intravenous phenytoin for seizure prophylaxis. 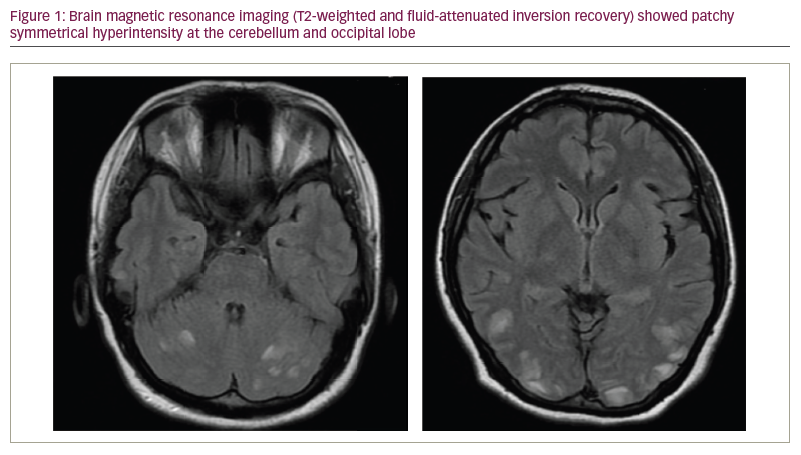 On day 1 after admission, the patient’s symptoms and visual acuity had improved. We observed her for two more days, and methylprednisolone treatment was continued and tapered down. Her blood pressure was around 130–140/80–90 mmHg. After two days, her symptoms had gone completely, and her visual acuity returned to normal. No seizure event occurred during the treatment. She was discharged without any neurological sequelae. Her oral antihypertensive drugs and immunosuppressive treatment were continued. She was given oral phenytoin for 1 week after being discharged before it was discontinued. By 1 month after discharge, she took her medications daily without any side effects. We did not observe any neurological deficit or any SLE
flare-up events.

PRES was first described in 1996 in a case series reporting patients with reversible neurological symptoms and white matter abnormality on neuroimaging using CT or MRI.10 These patients had risk factors such as hypertension, renal failure and immunosuppressive treatment.

PRES is found predominantly in women, probably due to the fact that the aetiological aspects of PRES are sex specific.9 It is most frequently found in middle-age patients, although it can present across all age groups. A previous study of patients hospitalized with PRES showed that PRES mostly affected women (71.7%), 87.0% of patients had hypertension and 45.5% had hypertensive crisis.11 In another study, patients with PRES mostly presented with seizures (74.0%), encephalopathy (28.0%), headache (26.0%) and visual disturbances (20.0%), and 45.0% of patients had autoimmune diseases, including thrombotic thrombocytopenic purpura and SLE.9 Our patient had SLE and hypertension as risk factors. She also presented with acute visual disturbance and severe headache. Occipital lobe oedema may cause visual disturbance in PRES, although not every patient with PRES with occipital lobe involvement has visual disturbance.9

PRES pathophysiology is still not clearly understood. The most popular theory is that severe hypertension leads to cerebral vessel dysregulation and vasogenic oedema.6 Breakdown in autoregulation occurs when mean arterial pressure is above 150–160 mmHg.6 However, this theory does not explain why there are patients with PRES who are normotensive or whose mean arterial pressure does not reach 150 mmHg.12 The other theory proposes endothelial dysfunction, which results in a dysregulated autoregulatory response of cerebral vessels.13,14 Endothelial dysfunction may be caused by autoimmune diseases, serious inflammation, anti-neoplastic drugs and some immunosuppressive agents.13,14 Our patient had SLE, which might cause dysregulation of cerebral vessels and be further aggravated by hypertension.

Brain imaging is the cornerstone in diagnosing PRES and ruling out other diagnoses. Non-contrast CT scan can visualize vasogenic oedema, but MRI, especially the T2-weighted and FLAIR sequences, is definitely the superior imaging modality.15 Radiological abnormalities in PRES consist of patchy bilateral hyperintense signals on T2- and FLAIR-weighted MRI in the parieto-occipital lobes. These areas are frequently hypointense on CT scans or T1-weighted MRI.16 The most commonly affected areas are the parietal and occipital lobes, followed by the frontal lobes, the inferior temporo-occipital junction and the cerebellum.4 This radiological abnormality usually completely reverses if treated accordingly.4 Parieto-occipital regions are more commonly affected due to fewer sympathetic innervations of vessels that originate from the vertebrobasilar circulation compared with anterior circulation.17,18 Cerebellar oedema is usually found in patients with a history of autoimmunity.9 Indeed, our patient also had cerebellar involvement as well as a history of SLE.

PRES is reversible when treated promptly, but delay in diagnosis and treatment may cause death and irreversible neurological sequelae. Mortality in patients with PRES is reported to be around 13%,28 and 10–20% of them may have residual neurological symptoms.29,30 However, in a case study from India, the mortality was 7%, and 93% of patients were discharged without any neurological deficit.31

PRES has a wide array of differential diagnoses, such as reversible vasoconstriction syndrome and cerebral vasculitis, which can be detected using angiography and several laboratory studies. As our patient responded well to treatment, and owing to financial limitations, we did not perform angiography or further workup. Symptoms and radiological findings in patients with PRES are usually completely reversed with treatment. In this case report, our patient’s symptoms completely resolved, but we did not repeat the MRI examination because of financial limitations.

PRES is a clinical syndrome with specific imaging findings. The diagnosis of PRES requires thorough clinical and neuroimaging examinations. Clinical suspicion of PRES must be high, especially in patients with pre-existing risk factors. Identifying its underlying cause and prompt diagnosis and treatment is important for achieving a better outcome and minimizing neurological sequelae or mortality in patients with PRES.

The patient provided informed consent to the publication of her medical data. Patient data were de-identified to maintain patient anonymity.

Welcome to our new issue of touchREVIEWS in Neurology, which features a wide range of topical articles covering various areas of neurology. We begin with two practice pearls. The first from Garg et al., focusses on the increasingly important subject of social media. Twitter provides a useful platform for clinicians, and this article provides advice on […]

Posterior reversible encephalopathy syndrome (PRES) is a syndome characterized by a combination of clinical and radiological features.1–3 Its global incidence is unknown. It is underdiagnosed probably due to limited awareness. PRES presents with the rapid onset of neurological symptoms, such as headache, convulsion, altered consciousness and visual disturbance. Computed tomography (CT) and magnetic resonance imaging […]

Paediatric-onset multiple sclerosis (POMS) is the symptom onset and diagnosis of multiple sclerosis (MS) before the age of 18.1 Diagnostic criteria were revised by the International Pediatric MS Study Group in 2013. Compared to patients with adult-onset MS (AOMS), young patients are less likely to develop primary or secondary progressive MS and more likely to follow […]